A group of twenty-six cars gathered at our usual southern meeting spot at the Chuy’s parking lot, which also included doughnuts provided by Mike and Judy Woodings—so you know it was going to be a good day. 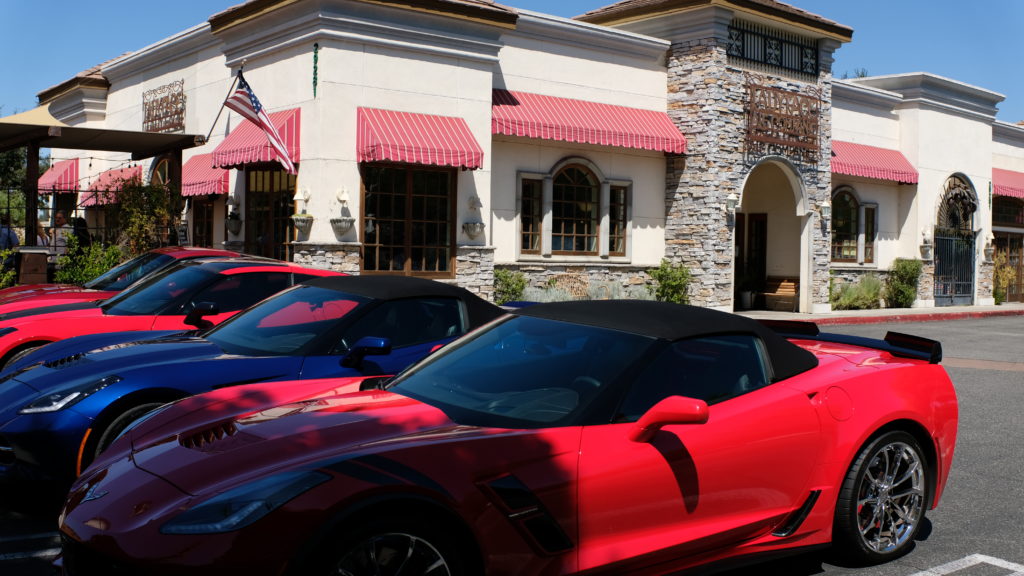 Following the drivers’ meeting, we headed off to Agoura Hills for our first stop, lunch at the Ladyface Alehouse and Brasserie. 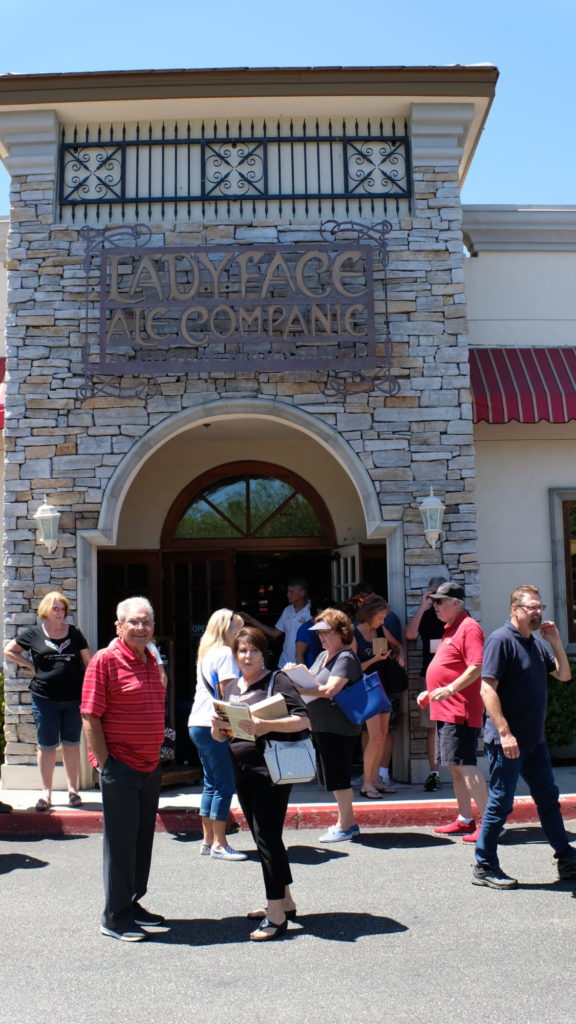 When we arrived, we pretty much had the place to ourselves, so they seated us inside, as opposed to the patio, which was nice- and certainly a lot cooler. 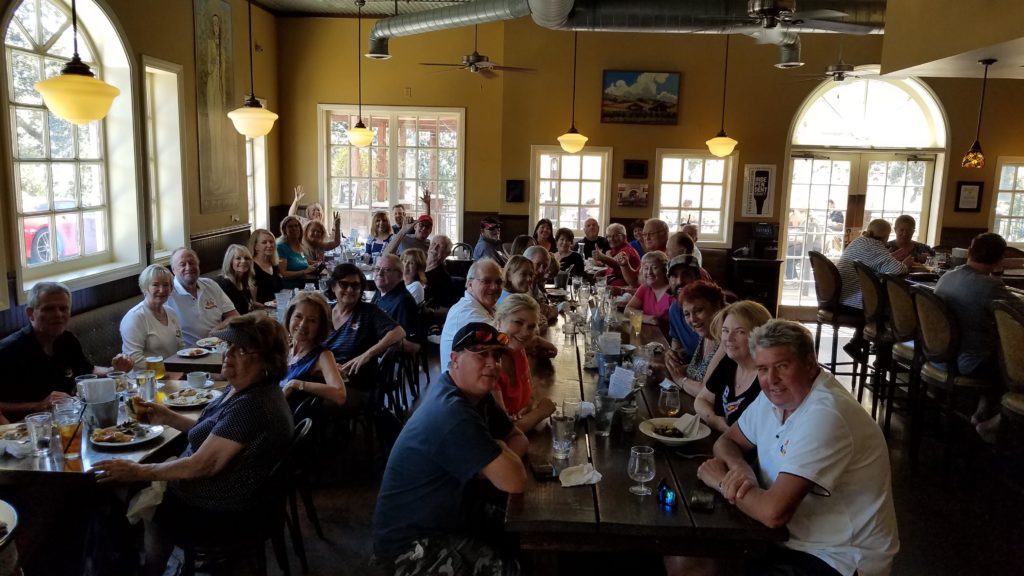 The menu at this local micro-brewery is geared around a French/Belgian theme, so the brewpub fare ranges from your basic burgers and fries (oops, I mean pommes frites), to duck confit and
steak tartare, with lots of good stuff in between, oui oui! 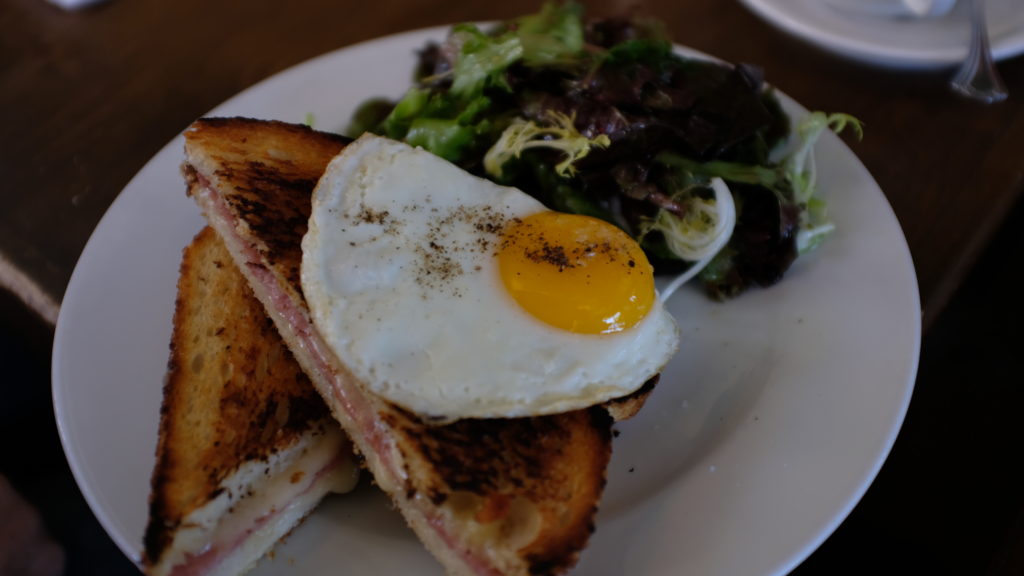 After lunch a few people had to breakaway, while the remainder of us headed over Kanan-Dume to the Pacific Coast Highway, which took us down through Malibu, and the customarily heavy weekend traffic, and on to the Pacific Palisades. Getting into the Getty Villa itself can be a little tricky if you are headed south on PCH, so we had to circle the wagons and then double back to make the main gate, but we all made it in fine shape. 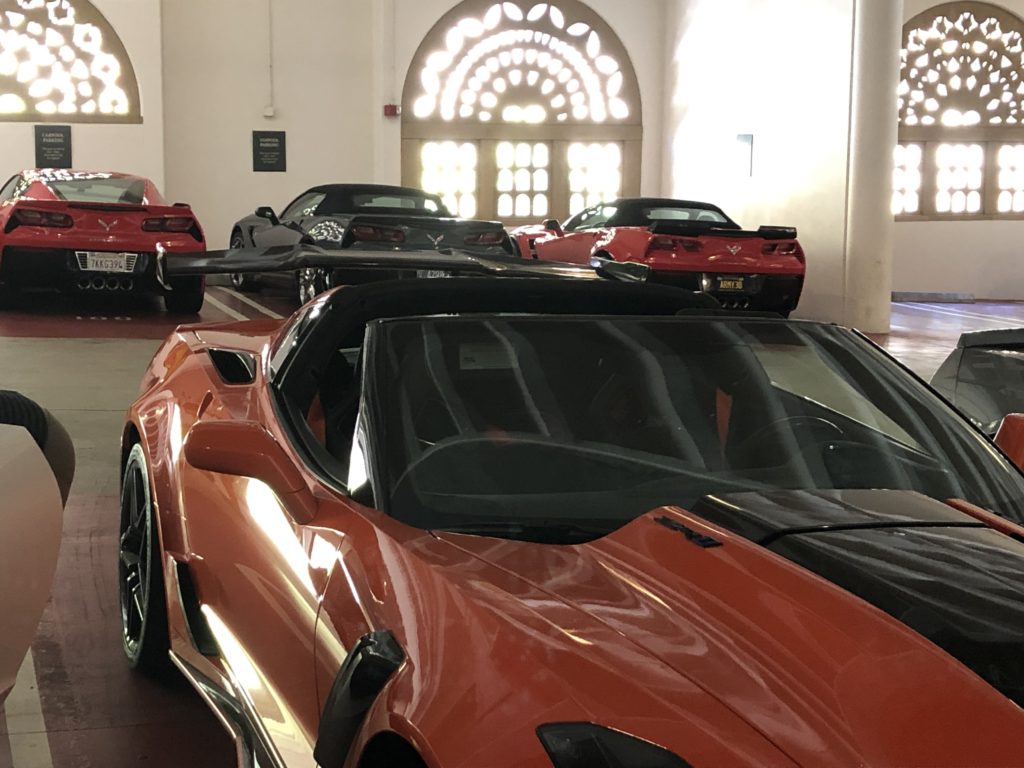 With everyone at the Getty Villa, we again gathered together for our docent lead tour of the grounds and gardens. 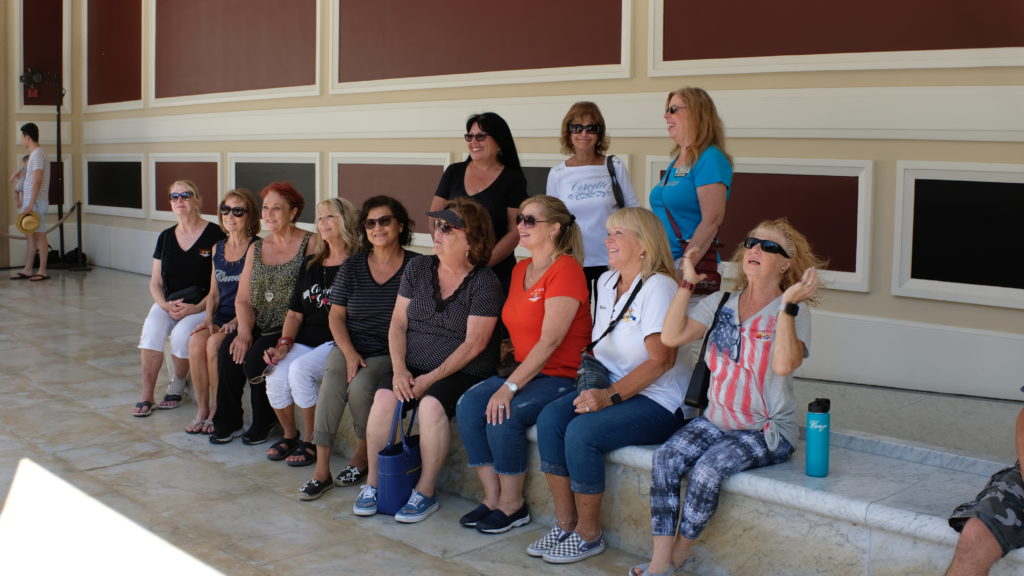 We learned from our young docent that the place was built as recently as 1975 (that’s recent for many of us), and is modeled after the ancient architecture of Greece and Rome, and more specifically the Villa dei Papiri, which was buried up to its ears by the eruption of Mount Vesuvius a really long time ago. 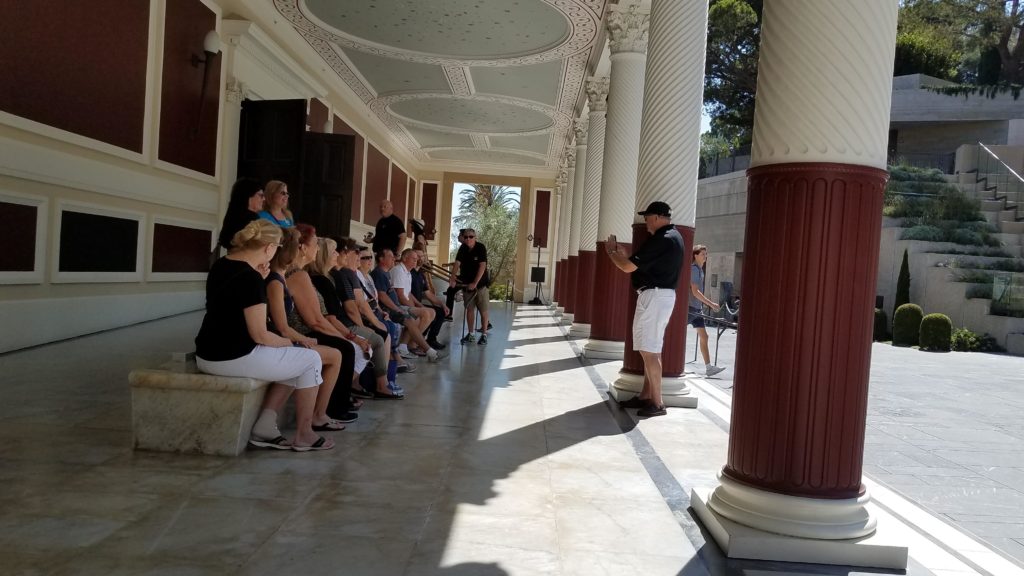 We also learned that the stories of the Greek Gods played a heavy roll in the design and architecture of that period, and was subsequently copied throughout the Getty. As these stories go, the Greek deities spent a lot of time hanging out in their togas and flip flops, drinking wine, and splashing around in the pool. 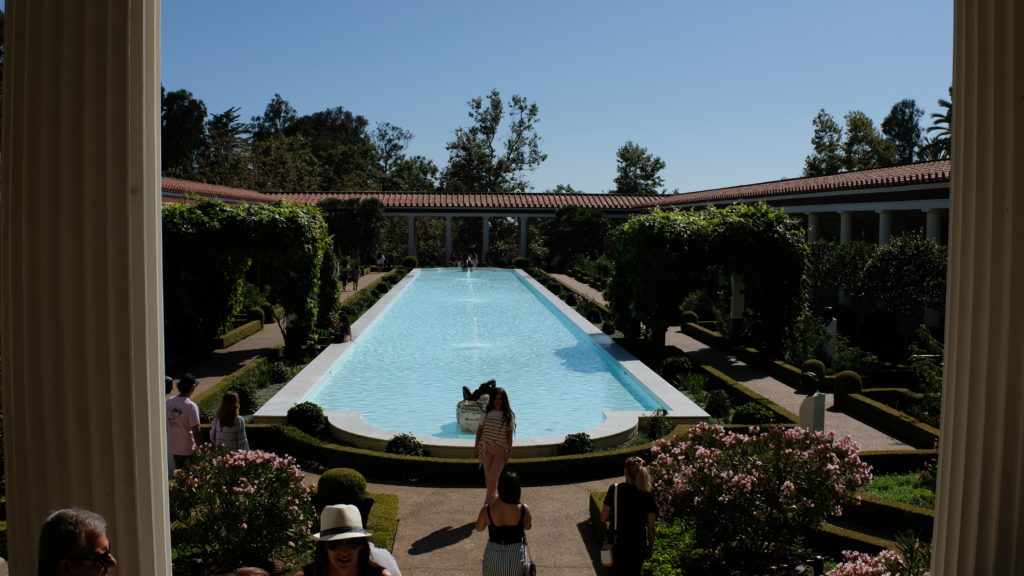 Clearly they had too much time on their hands, because it led to a lot of self-brooding, bickering, temper tantrums, and frolicking with mortals. That behavior then translated to incestuous lovers turning themselves into garden snakes, others being turned into trees, and at least one being shot with a lead arrow, and of course there was that whole thing with that snaky-headed Medusa turning people to stone…basically there was way too much drama back then…I’m just saying. 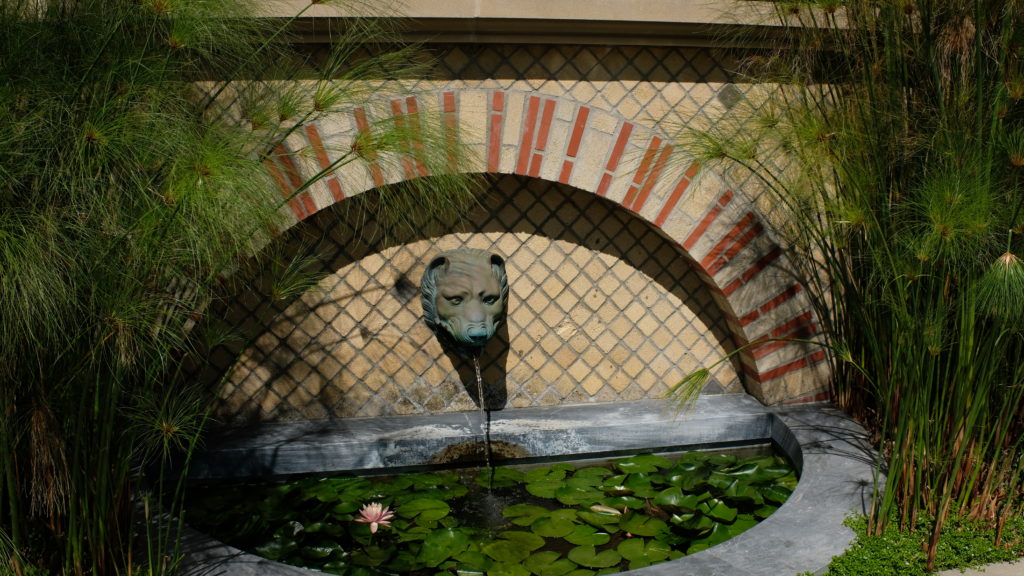 Undaunted however, Getty’s design includes many of these Greek stories and exact replicas of the intricate tile, paint and plaster from the afore mentioned roman residence. We also learned much about columns. Having been tested several times by our docent about these marble monoliths, I can attest to the fact that they are, Corinthian, Ionic, and Doric. Good information to have during a Scrabble game if you are digging-in for that triple word score.

From start to finish his was a fun and well planned Saturday. If you would like to attend our next event, we will see you for a fun day at Golf n’ Stuff in Ventura, on Sunday, September 8th. Check the website for more details.