A sense of fun was the air as eighteen members with ten cars gathered on a pleasant Monday morning at the Newhall IHOP for our pre-trip breakfast. 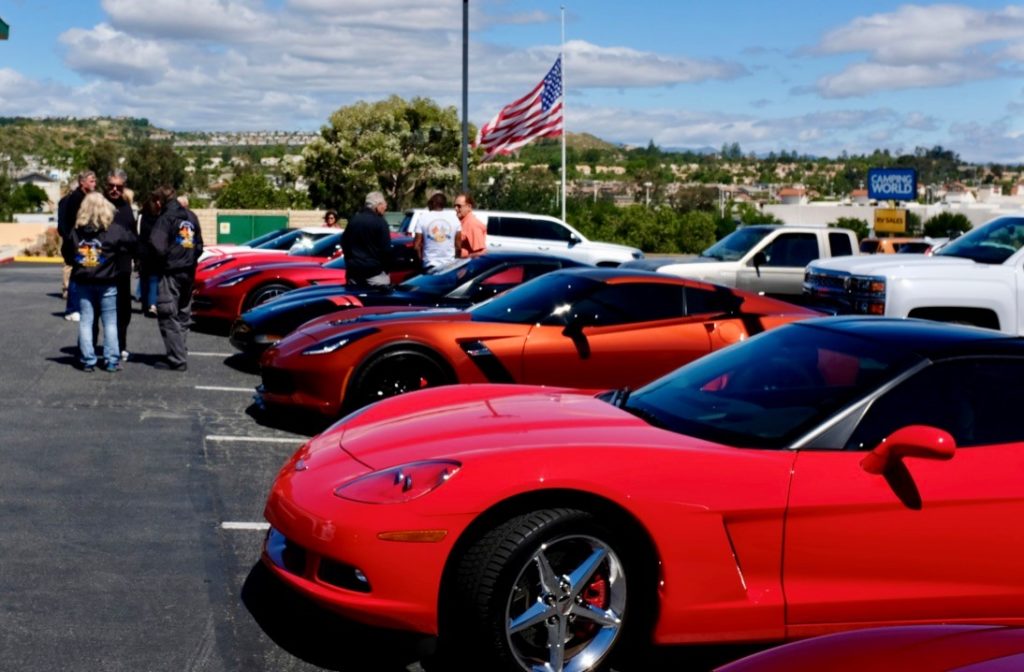 Once we were well-nourished, we held our customary drivers meeting, and immediately after that the cars rumbled to life. Following the usual radio check, we lined up for the trip that would take us several hours south on the 15 freeway to our first destination, Old Town Temecula.

In Temecula we arrived with some extra time for some pre-lunch shopping before gathering around the table at The Bank of Mexican Food restaurant for some of our south of the border favorites. 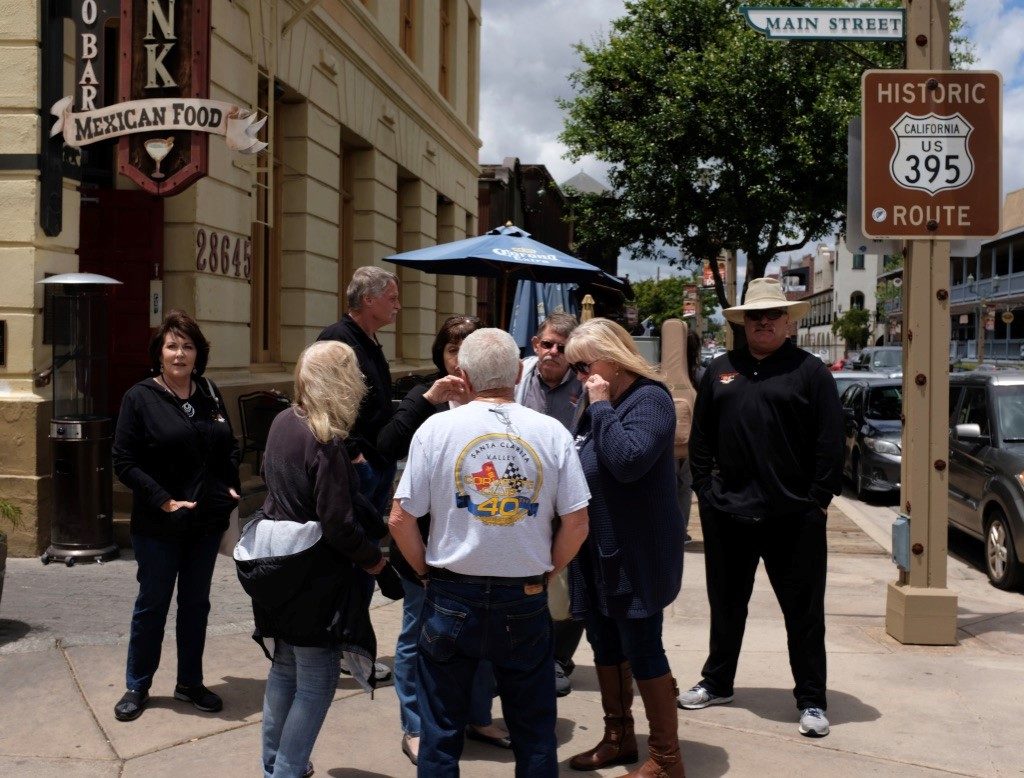 After lunch a we took a short stroll along Main Street where, wouldn’t you know it, we found an ice cream shop! After everyone was well stocked on sweets and treats, we headed back to our cars for the next leg of our journey, our hotel near Alpine, California.

Predictably, as we got closer to San Diego, we ran into some heavy traffic due to a couple of accidents, but our road captains, Dave and Karen, did a great job keeping us on track.

During the drive we also ran into more than a couple of idiots who were doing their best to generate some road rage, but it didn’t work because we are superior drivers with superior automobiles. We win! 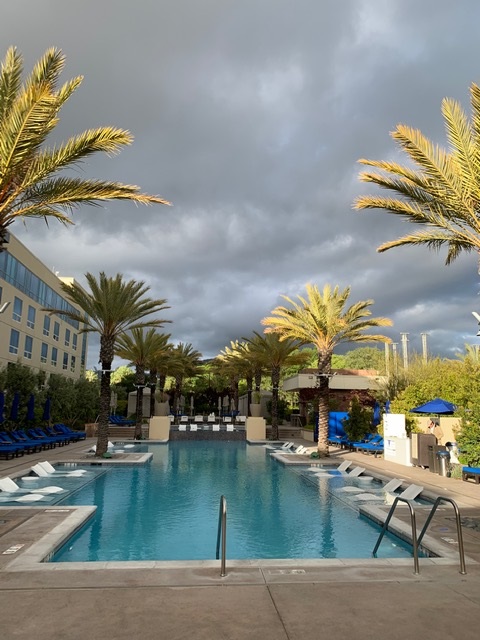 Before we knew it, we arrived at our destination, the very impressive, Viejas Hotel and Casino. Parking was easy and check-in was a breeze. After a short break to freshen up, we gathered in the lounge before heading to the Café Restaurant in the casino for dinner.

Our first dinner at the hotel was a lot of fun, and as is usually the case, it was not without its share of entertainment. It all got started when our waitress informed us that if anyone had a Bronze Card, we would receive a substantial percentage off of our meals. So, Ed Shaver was quick stand up for the group and start digging for his, only to learn that he had misunderstood, and that she wanted a Bronze card, not a Vons card! In Ed’s defense, others in the noisy din of the restaurant also heard her to say Vons card, but hey, an “A” for effort! It was right after that we learned they also offered a substantial discount for veterans, of which we have several, and the discount extended to everyone at the table. So, through our service members we were able to get our official Vons card discount anyway! All was good.

Other dinner highlights included Steve Hilton who ordered a tall glass of salad that arrived cleverly disguised as a Bloody Mary, and Jo Ayers who ordered apple pie alamode as her entree. Who doesn’t love these people!

As for the rest of us it was mostly salads and sandwiches, with a few potpies thrown in for good measure. 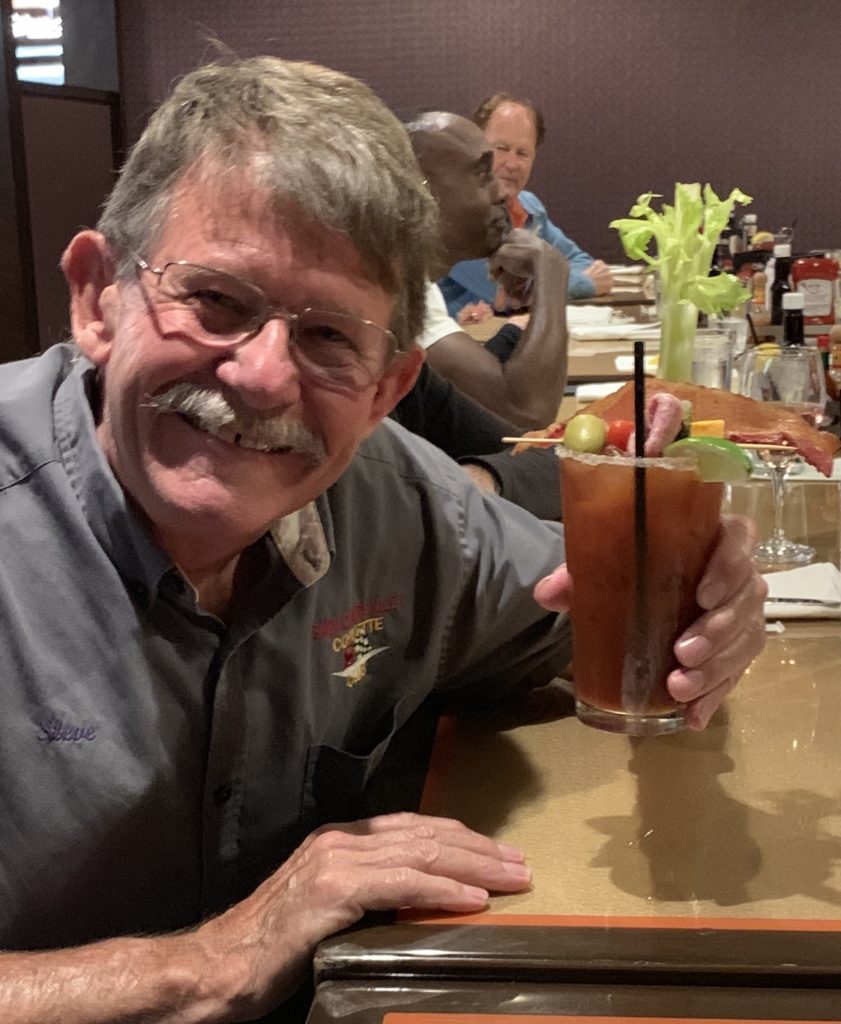 At the end of the meal, everyone was pleasantly surprised when Dave and Karen Jewett announced that they were picking up the check for dinner! Such unexpected generosity, and their actions further prove we that we have the most amazing people in our club! Thanks again to both of you, it was very much appreciated by all.

Before calling it a night, many of us stopped at the cashier’s kiosk in the casino to get our official Bronze card, as we didn’t want to make that mistake again.

The next morning, we awoke to overcast skies, light drizzle, cool temps, and the promise of wind and rain later in the day. Undaunted, we gathered in the Café Restaurant again, this time for coffee and a hot breakfast ahead of our day’s adventure. 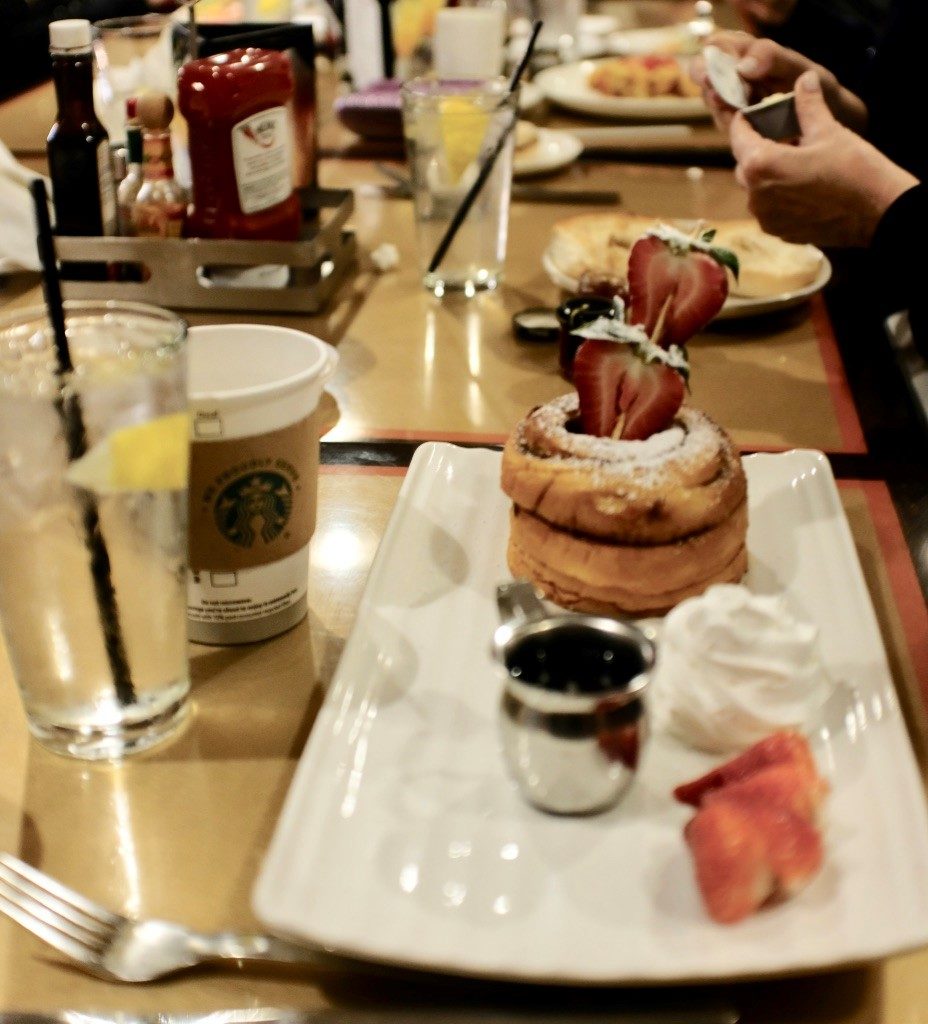 After a quick stop to give our cars a fresh drink of T-Rex juice, we ascended up into the clouds along Hwy 79, through Cuyamaca Rancho State Park for the short, yet amazingly beautiful, thirty-five-mile trip to the little town of Julian.

Along the way the clouds had settled low into the valleys, and misted out across the lakes and into trees to make for an incredibly beautiful trip. The steep, winding road was a pleasure to drive, and felt like it was designed specifically for our Corvettes. 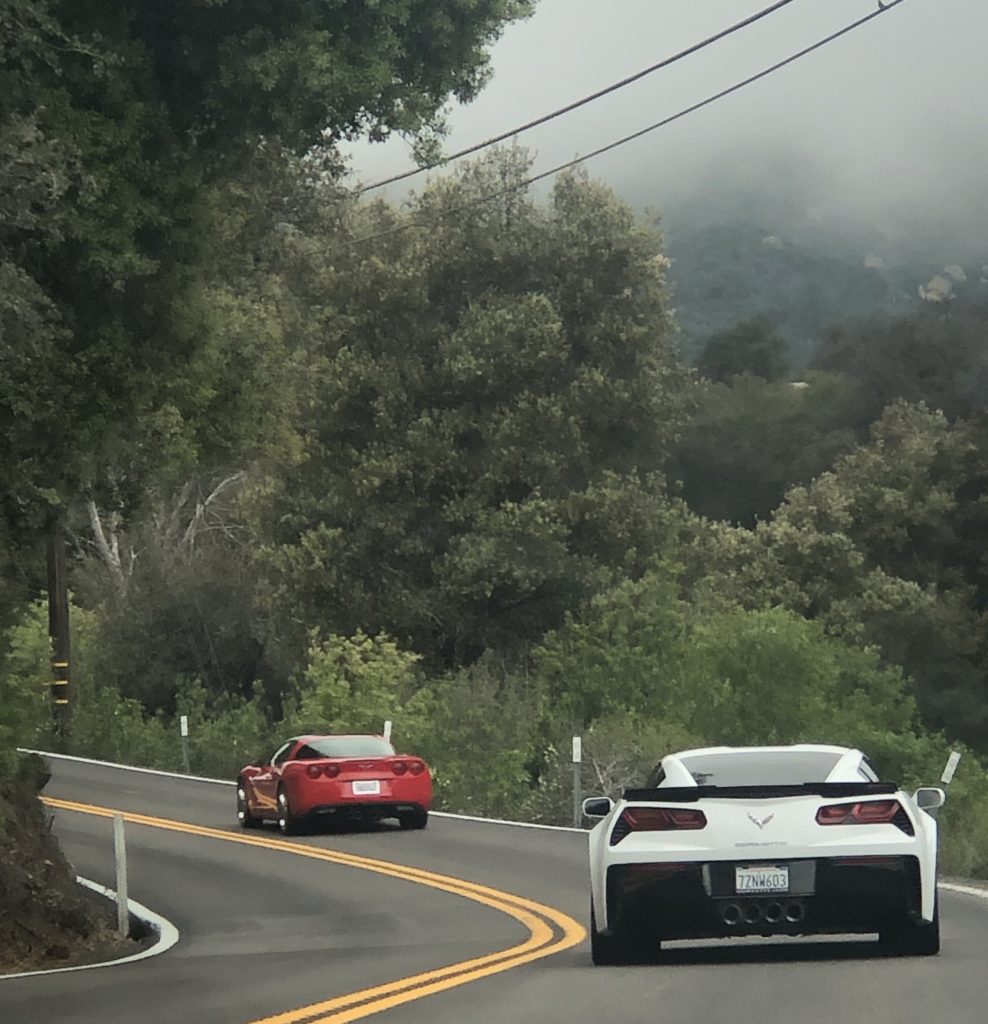 Once in Julian, we found it to be a charming, turn of the century gold mining town from the 1800s. Normally a busy southern California destination, it was not very crowded. Of course, it was the middle of the week, and in the off-season, and with the drizzle and unexpectedly cold wind, the weather felt like a scene right out of the movie, Ice Station Zebra. Maybe I exaggerate a little on that point, but it was darn chilly. 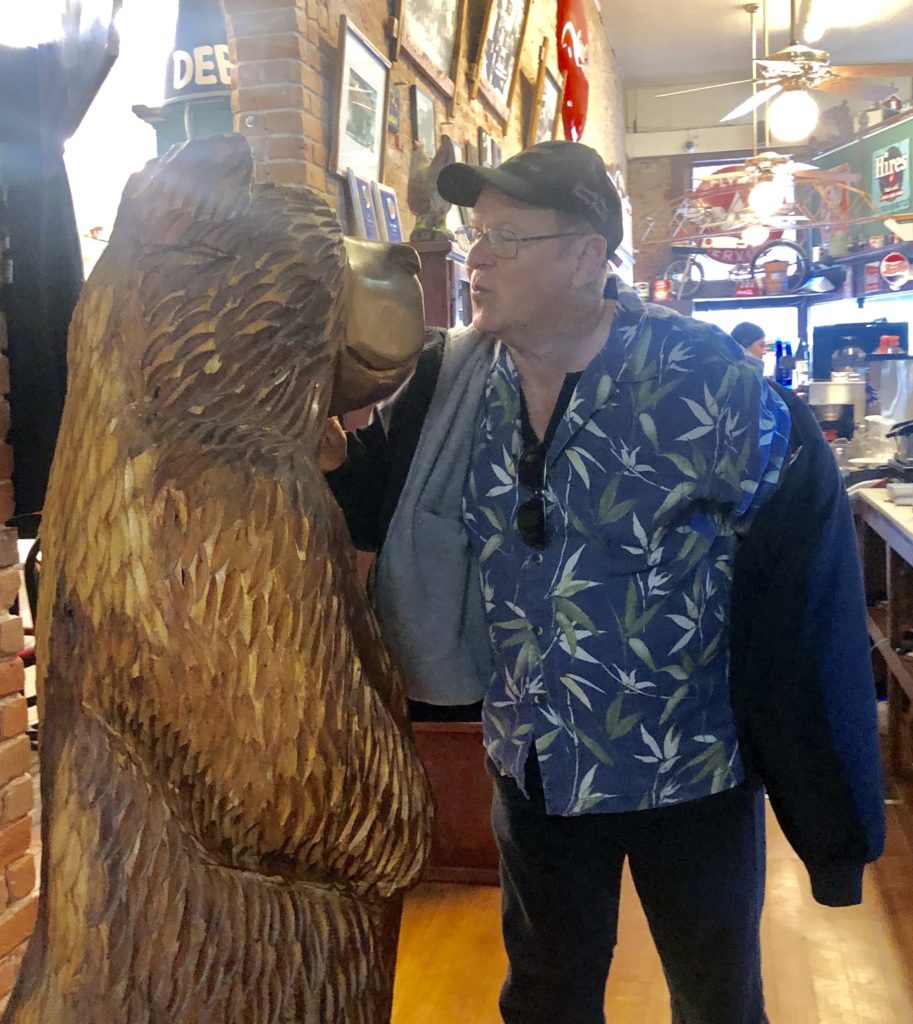 But still undaunted, we braved the elements to make our way on foot along Main Street where many of the shops had their wood stoves going, so the warmth of the fires was very welcoming. 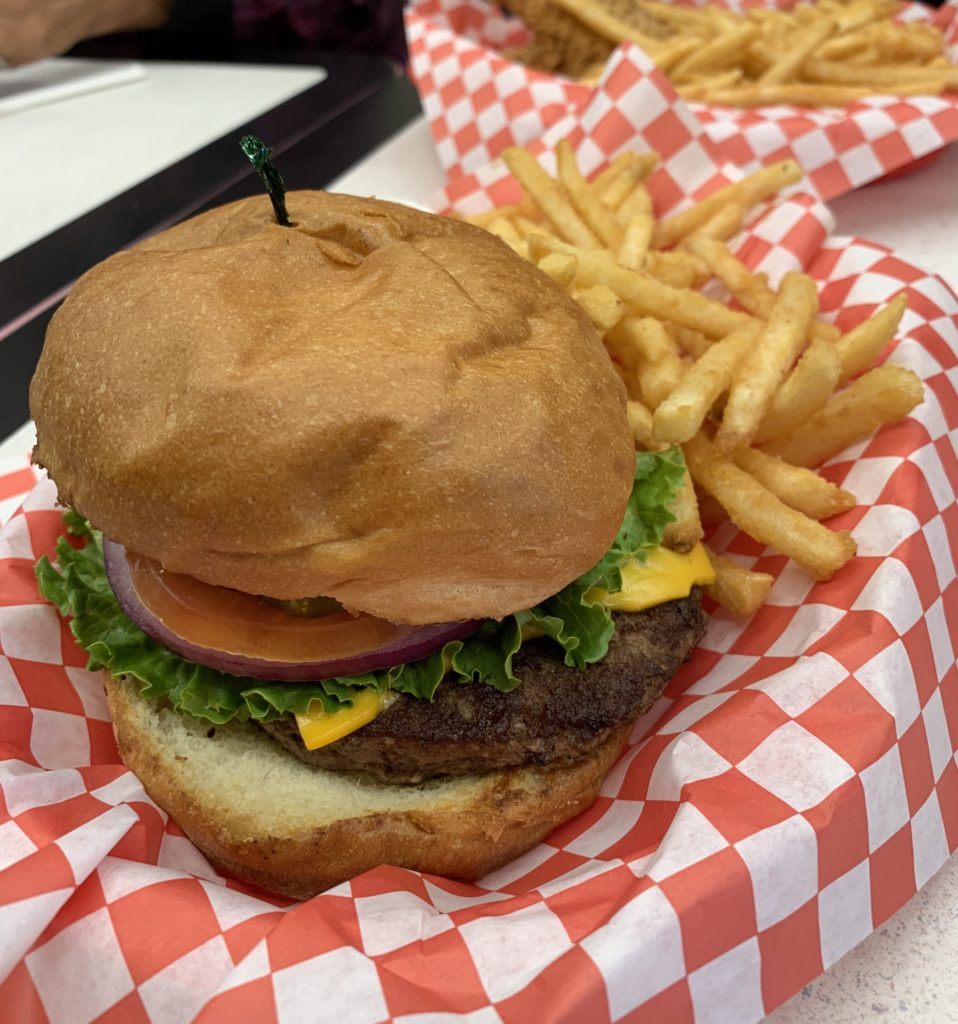 Lunch was at the Miner’s Dinner, a 50’s themed café located in one of the town’s many historic buildings, this one dating back 1886 when it was first opened as a general store. The food was good, plentiful, and included an old-fashioned soda fountain. They did not take Vons cards.

After lunch the plan was to go someplace and enjoy a slice of the famous apple pie that Julian is known for. But we had discovered there were many choices in which to get apple pie in Julian, and that caused what we might call some inde-slice-iveness about where we should get our pie!

But in the end, we all had a piece of the pie – some had their pie at the restaurant, while others had at this place or that one, but none of the pie lovers went away pieless. Some of us even got pie to take home – yum!
Once lunch and pie-time were over, and with the forecasted rain approaching, we didn’t hang around to let any grass grow under our cars. It was a really nice ride “home”, and everyone agreed that it seemed much faster going down the mountain, then going up. Perhaps it was because we were going faster going down the mountain, then going up, just saying.

Anyway, back at the Viejas Resort, we had some time to relax and unwind before dinner at the highly touted, Grove Steakhouse located inside the casino. But wait, what’s this? Closed on Tuesdays? Okay, who does that? This a major resort, and they close their marque steakhouse on the very evening that we planned to dine there. Honestly, who does that? The other restaurants don’t close. The steakhouses in Vegas don’t close. So why this one? The audacity of these people.

On the plus side, The Buffet at Viejas was open, and provided a wide selection of items, including slow roasted beef, tacos, chicken parmesan, crab legs, and the best dessert bar this side of the reservation. Sadly, they didn’t take Vons cards. But the remainder of the evening was spent roaming the casino, enjoying some drinks, and relaxing before a good night’s sleep before the trip home the next day.

On our third and final morning, the clouds and rain had set in as we met for a pre-trip breakfast at the hotel. After breakfast most caravanned home together, while a few used the opportunity to stop and see friends, or take a short side trip. Regardless of the route home, it was a great end to a fun, enjoyable, and well-planned trip.