It seems like just yesterday that I took the steering wheel of this fantastic machine called the Santa Clarita Valley Corvette Club and, with my First Lady at my side, started down a path with a vision of where the club should be heading, and the impact it would make in the community we live. I was excited and anxious at the same time but knew that the people in the club were supportive and willing to take the journey as we headed into the clubs future. Now, sit back and take my last Driver’s Seat ride with me.

In the beginning of my journey, there were some bumps and potholes along the way, but thanks to a dedicated Board of Directors, and a tolerant membership, we made it through the first year. The following year, there were a few people who left the board because of health matters and moving out of state. Those people were valuable to the board, but we adapted and continued moving forward. With a cohesive board, so many things were able to be accomplished, but not in “rubber stamp” fashion. Everything that took place in the club’s development and refinement of operation was a result of great deliberation and consideration for what’s best for the club, its membership, and compliance with all State and Federal regulations.

Our Corvette club is highly respected, not only in the City of Santa Clarita, but across the nation. Yes, that’s right, across the nation. Since the implementation of our 21st century website, we have become a “go to” organization, not only in Corvette circles, but to auto enthusiasts in general. We have established ourselves as a high quality and highly respected car club, and that’s because of the members who are so active and committed to making the club what it is today.

This success is not because of one person or a board of directors, it’s because of a great membership. A group of caring people, who care for each other, care for the community, and value the family friendships that are developed through our social events, runs, and car shows. The fact that we all have interests in the Corvette is the tie that binds us together. Our club is like a diamond, and we shine because of so many facets of people that make up our club membership. We don’t all agree on politics, we don’t all agree on religion, and sometimes we don’t agree on anything, but we all agree on driving our Corvettes, having fun together, and being part of something great.

As the President, I have been blessed over the years with a great First Lady, a great board of directors, and active committee people. The Executive Board has its duties, responsibilities, and its trials, and often go unnoticed by the membership at large, but it has dealt with each issue head on. All board decisions are made in the best interest of the membership, and not the individual.

Jim Fulmer has been an outstanding Vice President, and a vital asset to club and the President in so many ways. Not only has Jim been a voice of institutional history, but he’s been the driving force behind so many functions, club events, and why our 50/50’s are so popular. Jim has seen what was, knew what should have been, and had a vision of what could be, having served in several other positions on the Board’s since 1988. His behind the scenes involvement has made our club so successful and coveted.

Ron Bergmann has held the most thankless and truly most unappreciated position of club Secretary, and it’s the second most critical duty on the Board of Directors. He has never wavered from the responsibility. His attention to detailed documentation, knowledge of procedural requirements and responsibilities has kept this club in compliance with established rules, regulations, and legal requirements. Ron has been the “checks and balances” of the administration of the Board of Directors and his actions are what keeps the club on track and a professional entity.

The most critical and demanding position on the Board of Directors is that of the Treasurer. Elke Couples has been the best Treasurer this club has ever had, and I can say that with firsthand knowledge, and affirmation from past Presidents, dating back to the 1990 President, John Noble. From the first day Elke took control of the finances, she has accounted for every penny that has come into or left this club. Her accurate documenting of income and out-go has kept everyone aware of the finance and ensures that there are no wasteful expenditures. The club’s finances are public record as a tax-exempt organization. Finances are the most critical part of any organization and accurate financial records keep the club from losing its 501(c)(7) status, and that keeps people from going to jail. Elke’s monthly accounting is presented to the membership at each meeting and anyone can see exactly where the money goes, at any time.

The Board positions that everyone sees and hears about the most are the Activities Committee. Joyce Bergmann, Glenda Fulmer, Janene McDonald, and Mark Ware have taken Activities to a new level and are the backbone of our club’s reputation as being a truly active Corvette club. The Activities Committee has come of age in planning, organization and communications because of Mark’s innovative new website. Activities no longer require people having to see a written piece of paper at each meeting describing the months ahead. Members (anyone for that matter) can just go online to scvcc.org and the information is there. Planning and coordination are more accurate and immediate, saving countless hours of wasted time and effort.

The Activities Committee has brought professionalism to the club and to the members in general. It’s been said that behind every great man stands a great woman. Well, behind the club’s President, stand three great women, Joyce Bergmann, Glenda Fulmer and Janene McDonald. Those three women pull together outstanding events which appeal to everyone to one degree or another. Each lady brings something invaluable to the club. They bring desire, drive and integrity. They are so committed to making events the best they can be that they work relentlessly and with much self-sacrifice to pull together functions that appear to flow seamlessly. Mark created an operating model events calendar for the year which keeps the Activities Committee on track and focused. Mark is the type of guy that doesn’t worry about who gets the glory as long as the job gets done. He truly deserves recognition for what he does. Additionally, because of Mark’s operating skills, all of our events are successful. It’s not always about speed and performance (although Mark Ware would like it to be), but the Activities Committee leans toward social and interactions with each other. After all, when you drive somewhere you’re not just going to turn around and drive back. Your car needs gas, and your body needs food, so we drive and eat, or eat and drive. If the women in the club are happy, so are the men.

Our Membership Chairperson, Judy Woodings, has done an excellent job over the past years with her outgoing personality and personal ownership of the position. She always goes out of her way to make new people feel welcome and wanted. She always follows up both with a written communication and a personal telephone contact. Her actions exemplify another facet of the club’s reason for being so successful. A good Membership coordinator makes for a good Board, and a great club membership.

Back in 2005, Bill Thomas became the club’s first Quartermaster, and since then, only three other members served in that position. I can say without a doubt, that as of 2014, Deana Shaver has taken the Quartermaster position to a level that far exceeded my expectations and has brought the quality and style of our clubs appearance to a whole new standard. Thanks to Deana’s innovative ideas, drive, marketing skills, and personal commitment to serving the club membership, we now have a quality product, a stylish appearance, and a feeling of pride when we gather together at functions, club runs, or special events. Additionally, Deana has taken on the duty of Special Events Coordinator”, which is basically the person who pulls our annual Christmas Party together. It’s a labor of love, but also pride in putting together such a special event for the membership. Deana spends nearly nine months planning and coordinating all aspects of the event.

Communications is an important aspect of any club. Keeping everyone up to date on club events and important information is time consuming and can be a daunting task, especially when the world of technology goes tilt. When our ‘Master of Message Management”, Tony Munshi moved away, leaving a vacancy in the Communications position, I took on the position. After all, how hard could it be? Needless to say, I’d rather have had a no Novocain root canal than do Communications. Anthony Bachmura stepped up to plate an offered to take on the duty as the “Communications Guy”. Being that he was eager to be an active part of the club, and wanted do Communications, I was equally as eager to let him do it. In today’s electronics world, communications can be an instant and ever-changing nightmare. Anthony has taken to the duty, like a duck to water. If you’re not getting informed, it’s not because of Anthony.

Our Newsletter, which is now sent electronically, is the lifeline of our club and to those desiring to know about our club. Mike Woodings has been the Editor in Chief of the Newsletter for the past 6 years and has made great strides in the quality of our publication. He’s made several design changes to the look and format of the publication and has been innovative with the incorporation of interest articles such as “Vette Vittles”, “Laff Traxx”, and our “Corvette Classifieds”. Additionally, Mike makes sure that we all stay informed and educated with subjects related to us as a club and Corvette enthusiasts. Our members often comment on the quality of the Newsletter that Mike puts out and I have not seen a better publication from a social car club.

Yes, I’ve taken a lot of your time, but you need to know what it takes to make this club run, and to run efficiently. It’s your club, and a reflection on you as a member. I encourage you to get involved and be an active part of the success that has been laid before you.

As Janene and I complete our drive down the path we started with the club, we are thankful for the support and trust the members had in us, as well as for the privilege of being part of such a great club. We have made so many close and lifelong friendships, and sadly, we’ve seen several of our great friends take their last Corvette drive down the road of life. We are thankful for each and every person that we have met and come to know and we are fortunate to have such an extended Corvette family. As we leave the state for our new home, we leave with mixed emotions. It’s so hard to leave something that is part of you, and something you love deeply.

Mike Woodings will now take the controls of this magnificent club and I wish him great success, and with the support of this fantastic membership, the transition should be seamless.

On behalf of Janene and myself, thank you for a great journey, and love to you all. 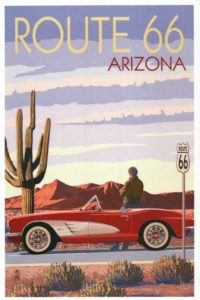 Our Past President Ron Fellows Experience