All of a sudden, October was here and the much anticipated (by some) Southwest Caravan was a reality.  The caravan was scheduled to include the 48th Annual International Balloon Fiesta in Albuquerque and then to continue on to enjoy National Parks and sites off the beaten track in our wonderful Corvettes. 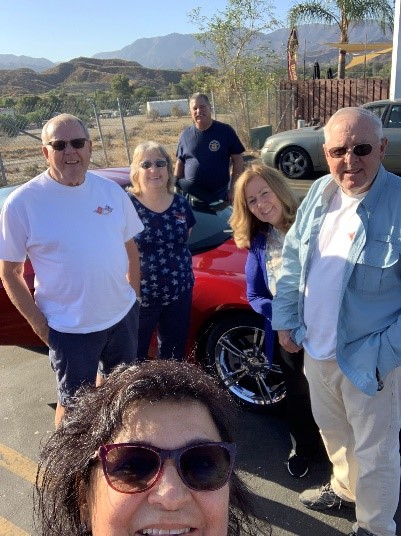 The morning following our October General Meeting, our adventure began at Denny’s on Sand Canyon as we rolled east to our first “roadblock”, construction on Pearblossom Hwy in Palmdale.  Ugh, but not too bad.  Off again to another construction delay before we even got to Victorville.  Dang.  The first day continued fine where we all enjoyed a relaxing lunch at Pirate Cove on the Colorado River with our friends Greg and Pat Attl.

Off again eastward for our first night at Flagstaff, we learned of another roadblock ahead when we reached the Havasu turnoff from I-40. We had to detour back through Bullhead City due to an overturned big-rig closing the Interstate and blocking our route to Kingman.  We rerouted as required and “DANG again” 14 miles from Flagstaff for more construction with our forward movement slowed to 4 mph!  Flagstaff was a welcome stop after all that, but wait, there is more!  Jeff Carley reported to us that he believed he was having trouble with his Vette, the left rear was sagging, not from overloading.  Initial parking lot diagnosis pointed to an issue with the left rear lowering bolt. 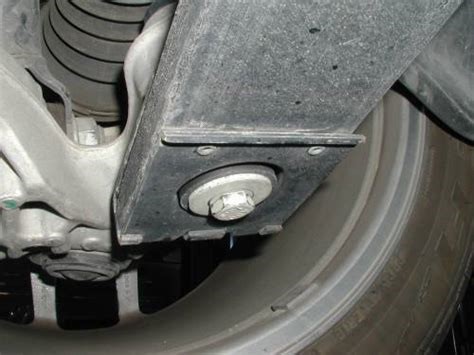 Early morning follow-up at Marxen Chevrolet in Flagstaff confirmed a broken lowering bolt and the prognosis was the car was ok to drive to Albuquerque where parts were ordered for delivery on Monday. 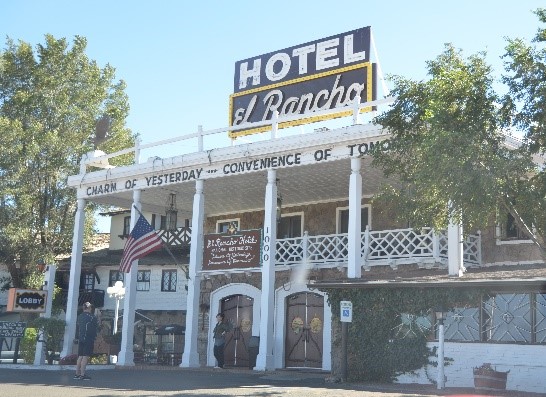 The remainder of Arizona on Day 2 was scenic but uneventful.  We found downtown Winslow crowded with a classic car show so on we went to Gallup, NM and the Hotel El Rancho for our first taste of New Mexico “red or green” cuisine.  After arriving in Albuquerque, it was a short day in preparation for Day 3 and an EARLY start for the Balloon Fiesta. 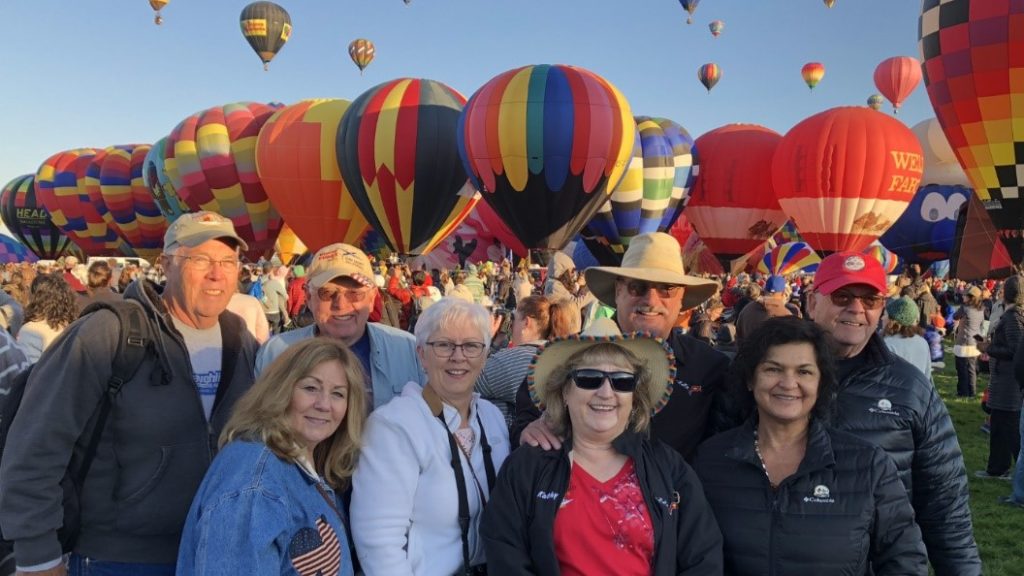 The crowds were huge at 5:30 AM as we arrived at the Fiesta Park and Ride for our bus trip to the Balloon Park on the north side of Albuquerque.  The mass of people was even larger as we entered the park as hundreds of hot-air balloons were in various stages of inflation in preparation for the 7 AM mass ascension.  Jeff, you remember Jeff, didn’t even think about bolts that morning with all of the balloon excitement!  We found Old Town full of balloon fiesta tourists at mid-day and opted for a drive through the Bosque and visit to Los Poblanos Historic Inn and a drive through the Village of Corrales.  The early start of Day 3 called for some relaxation in the afternoon before dinner at the famous Frontier Restaurant on old Route 66, across from UNM. 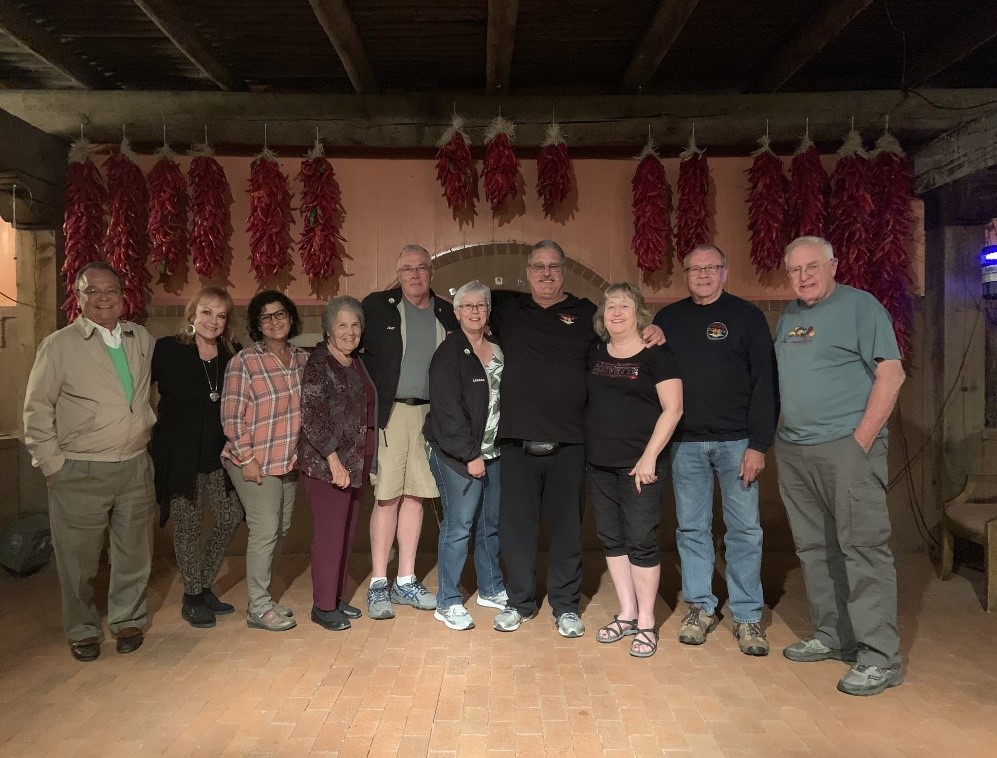 On Monday, Day 4, Jeff and Leeann broke away for their needed bolt repair at Bruce’s Corvette & Auto Service and were happily good to go for the rest of the trip as well as for a visit to an Albuquerque quilt shop while the remainder of us made our way to Santa Fe.  We drove east of the Sandias through Madrid up NM-14, the Turquoise Trail. 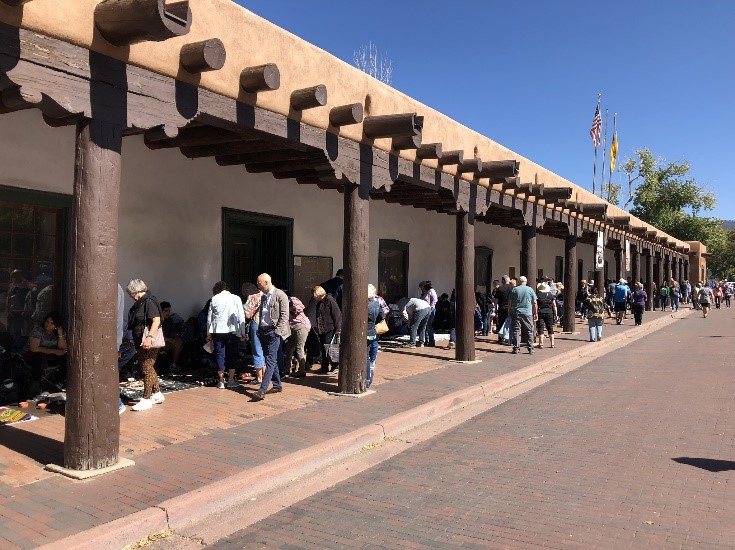 Despite missing Santa Fe, the Carleys still smiled their way through Day 4!  Santa Fe was founded in 1610 (before the Pilgrims landed ay Plymouth) and is the oldest state capital.  It’s old and scenic with plenty of choices of places to eat or spend your money, from high end art to the native jewelry in Palace of the Governors.  As we returned to Albuquerque, the Schmidts’ status changed slightly with Cindy flying back to LA for an overnighter to appear on local television leaving Gene with us until her return.  Meanwhile, Judy, with not only New Mexico roots, but New Mexico connections as well, arranged for those remaining to enjoy an afternoon wine and cheese get-together at her cousin Katie Santiannes’ home prior to our dinner with local family at El Pinto in the North Valley.

Day 5 was an easy day as we headed north to Durango, CO.  We departed from Albuquerque without Gene as he awaited Cindy’s return flight but he continued to enjoy Albuquerque for another day with a trip up the Sandia Tram and a hook-up with cousin Katie for more Armijo family visiting.  Our 3-Corvette caravan visited the Aztec Ruins National Monument in Aztec, NM, to walk the grounds of a 1,000 year old Pueblo settlement.  We then rolled into Durango, still with time for Leeann and Judy to take in a visit to the Stitch A Quilt Shop.  Gene and Cindy followed us as darkness fell and our caravan was back together again.

Day 6 was our day for the narrow gauge railroad ride to Silverton through the amazing canyon along the Animas River.  The scenery was beautiful with the changing seasons and the temperatures were chilly and the air was thin at 9,300 feet in Silverton.  The Durango-Silverton RR was a kick and made for a fun day. 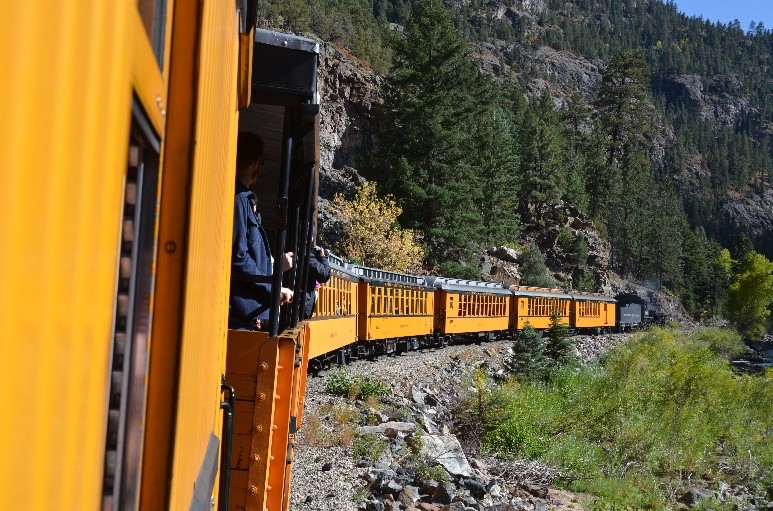 Day 7 was a little longer with us ending back in Arizona at day’s end.  Enroute, we covered a lot of backroad miles too.  Our first stop of the day was at Mesa Verde National Park outside Cortez, CO.

Mesa Verde is famous for over 600 cliff dwellings of the Pueblo people, quite a sight.  It was then off to Four Corners, where Colorado, New Mexico, Arizona and Utah meet.  The Navajos have the corner (or 4 corners) on the market there with $5.00 a head to see a survey monument afixed to the red earth there.

Off again to our lodging in the woods in Jacob Lake, AZ took us by Monument Valley and through a Hopi Pow-wow in Kayenta, AZ.  A great caravan day.

Day 8 had North Rim Grand Canyon on our calendar.  The views are much different than those typically seen from the South Rim and the canyon is more up close and personal.

Another cool day with club jackets a must at over 8,000 feet elevation.  With less that 10% of Grand Canyon visitors coing to the North Rim, it is worthwhile trip for those who enjoy the road less traveled.  Brian and Kathy missed the Grand Canyon visit as they peeled off from the caravan to visit relatives and take in the Prescott Corvette Car Show, hooking up with SCVCC alumni for a quick “howdy”.  Day 7 then took our remaining Vettes to Kanab, UT for the night.

Day 9 had Bryce Canyon National Park as our visit of the day.  Once again, a beautiful but cool day with ice in the puddles at 8,800 feet elevation.

The sights were glorious and easily accessible, except for Bryce Point with limited parking.  Parking attendants were less than cooperative about us trying to save parking space for one another and that will just remain a story for another day.

We went on to caravan to St. George, UT, where yet another quilt shop was visited briefly before we rolled back to Pacific Daylight time and entry into Nevada.  The Schmidts continued to Las Vegas for personal and show time on the Strip while the Carleys and Woodings opted for Mesquite.  Rested and ready to roll on Day 10, the Carleys headed home to Parker, AZ where Jeff will re-address the lowering bolt issue and the Woodings made a stop at Cracker Barrel in North Las Vegas, having passed by six others during the caravan.  Love those biscuits.

The International Balloon Fiesta is the first week of October every year and we are already looking forward to another caravan including the Fiesta then along in another route to the south next time for more Southwest attractions.