We have all caravanned out on the 126 a time or two. Most of us have even been to Santa Paula Chevrolet for both business or pleasure or a combination of the two. 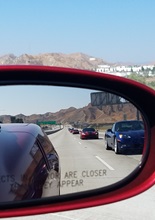 We have partaken of the great BBQ prepared by Laird’s Butcher Shop & BBQ and have enjoyed the hearty fare. The same is likely true for the Redline and Ventura Corvette Clubs as well, but twice a year we are faithful in answering the call and return to Santa Paula Chevrolet for yet another lunchtime BBQ feast surrounded by scores of terrific Corvettes (ours and theirs) and plenty of other tempting Chevrolet products.

On Aug 18th, our pilgrimage began with the mandatory sign-in and drivers’ meeting in the Walmart lot under a pleasantly cool blue sky. There were a large number of tops down or off for the drive as eighteen gorgeous Vettes lined up and rolled west toward a partial marine-layered and cooler destination. Judy and I led the way in our ’62 with its new water pump and enjoyed this trip to Ventura County without any overheating. A reading of 160˚ on the water temperature gauge and wind in our hair, a perfect combination for our easy morning drive. 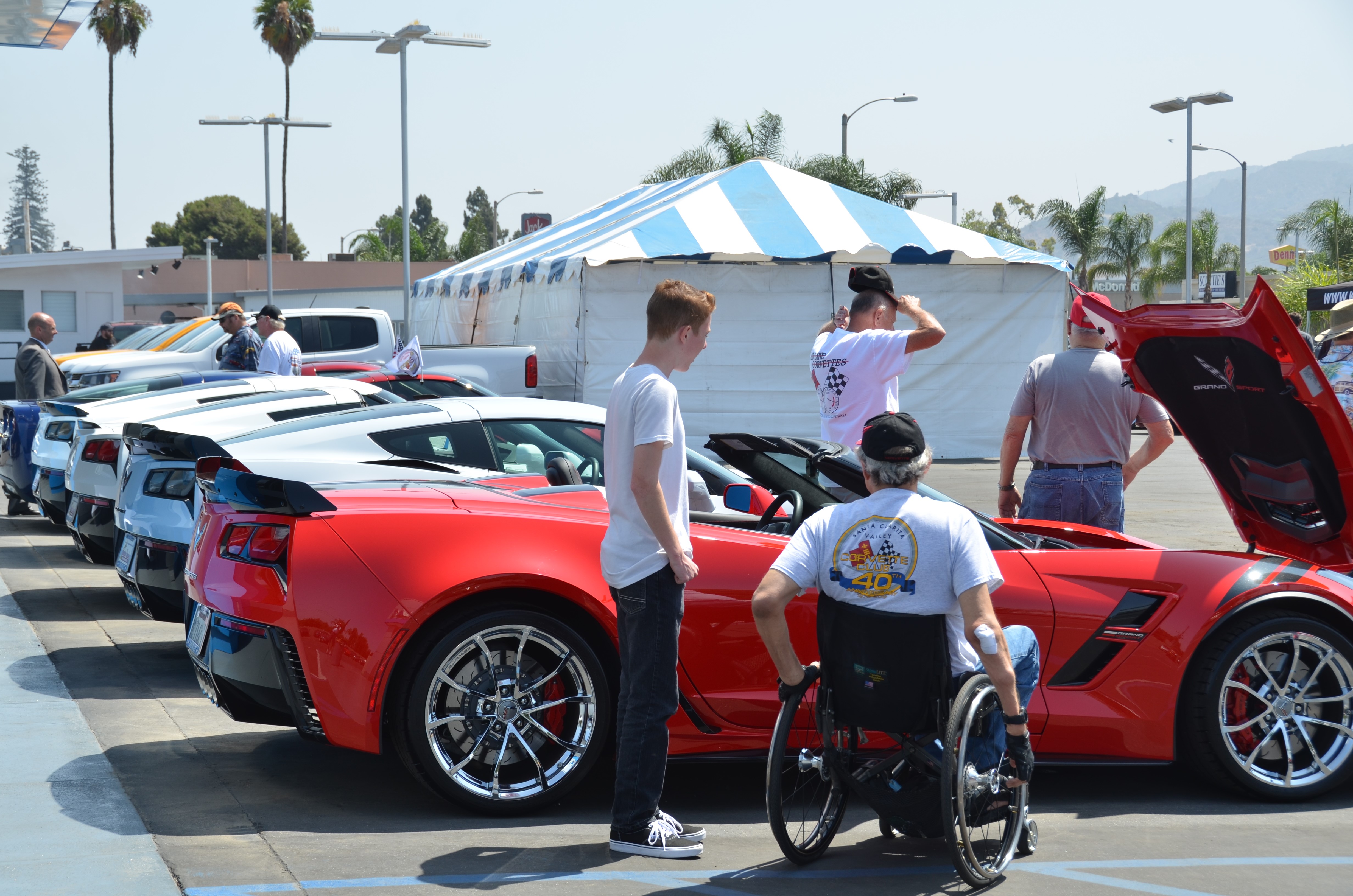 Once we arrived and lined our Vettes up among the early arrivals we went about the usual tire-kicking, visiting, and maybe even some shopping. The dealership had numerous tempting retail Corvette related items for sale and of course there were new Corvettes and other Chevys to drool over.

Even though this caravan was similar to other BBQ caravans, it still offered it’s own unique flavor. This was the first club caravan for Peter and Carrie Di Orio, who enjoyed the ride tremendously. Tom Tomlinson brought his neighbor Don Knight, not yet a Corvette owner, but Don bought a Corvette hat from the dealership display, so what might be on the horizon? 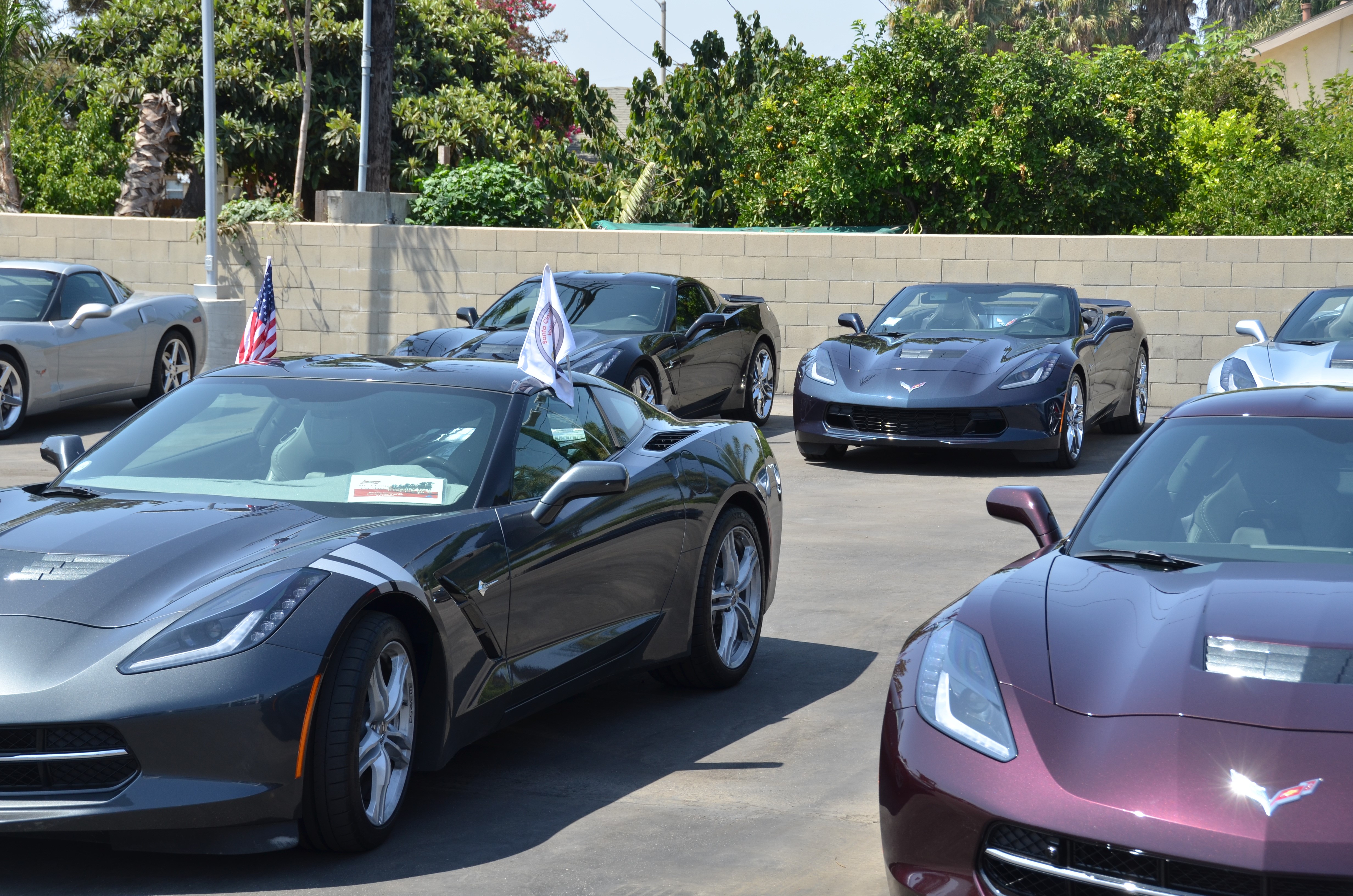 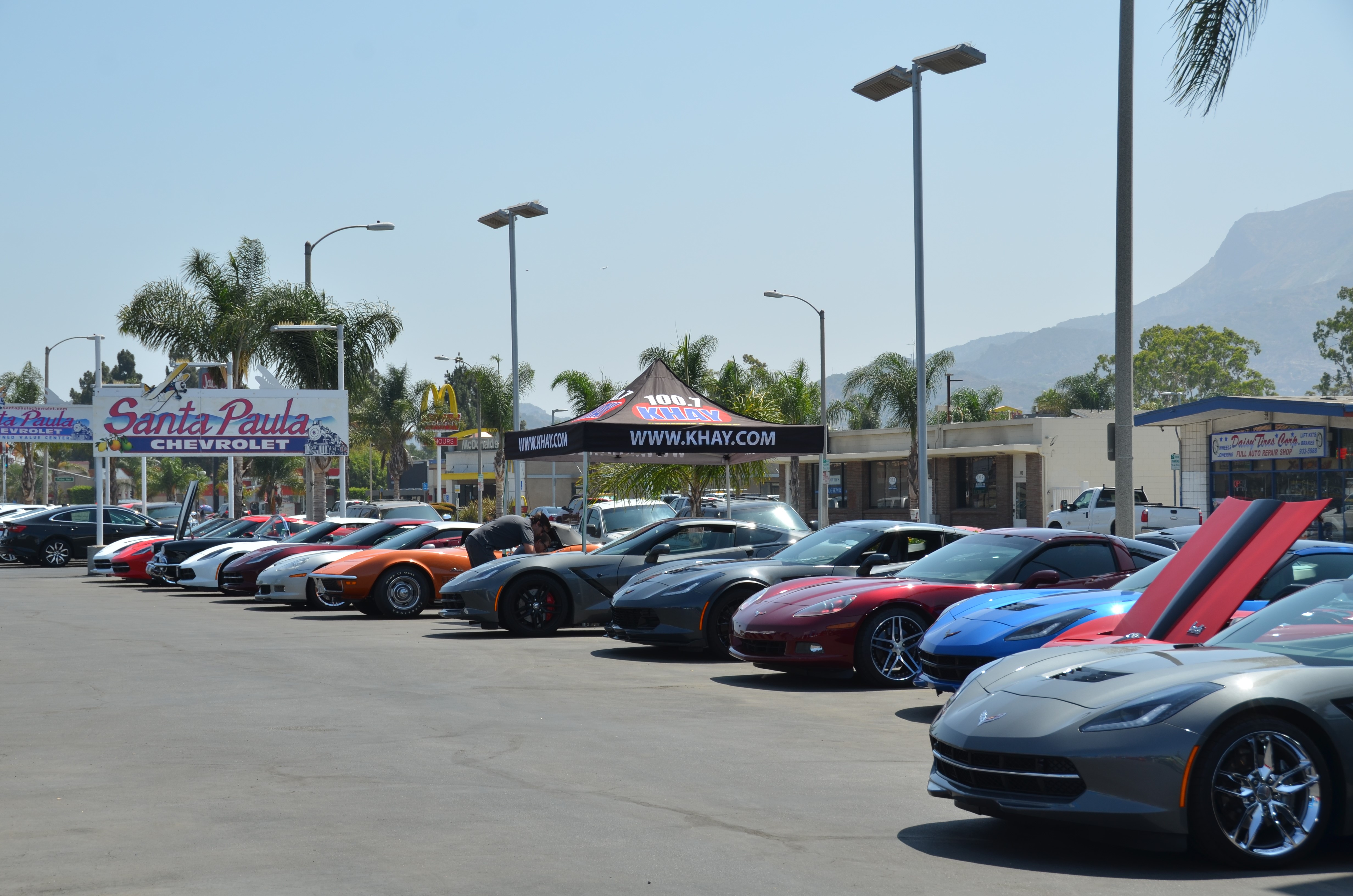 Oh, there was still another unique event at the BBQ. We conducted a special new member induction of our first and only Honorary Members. Your board recommended the recognition of John and Sandra Macik as Honorary Members in recognition of their outstanding service and support as sponsors of the Santa Clarita Valley Corvette Club. 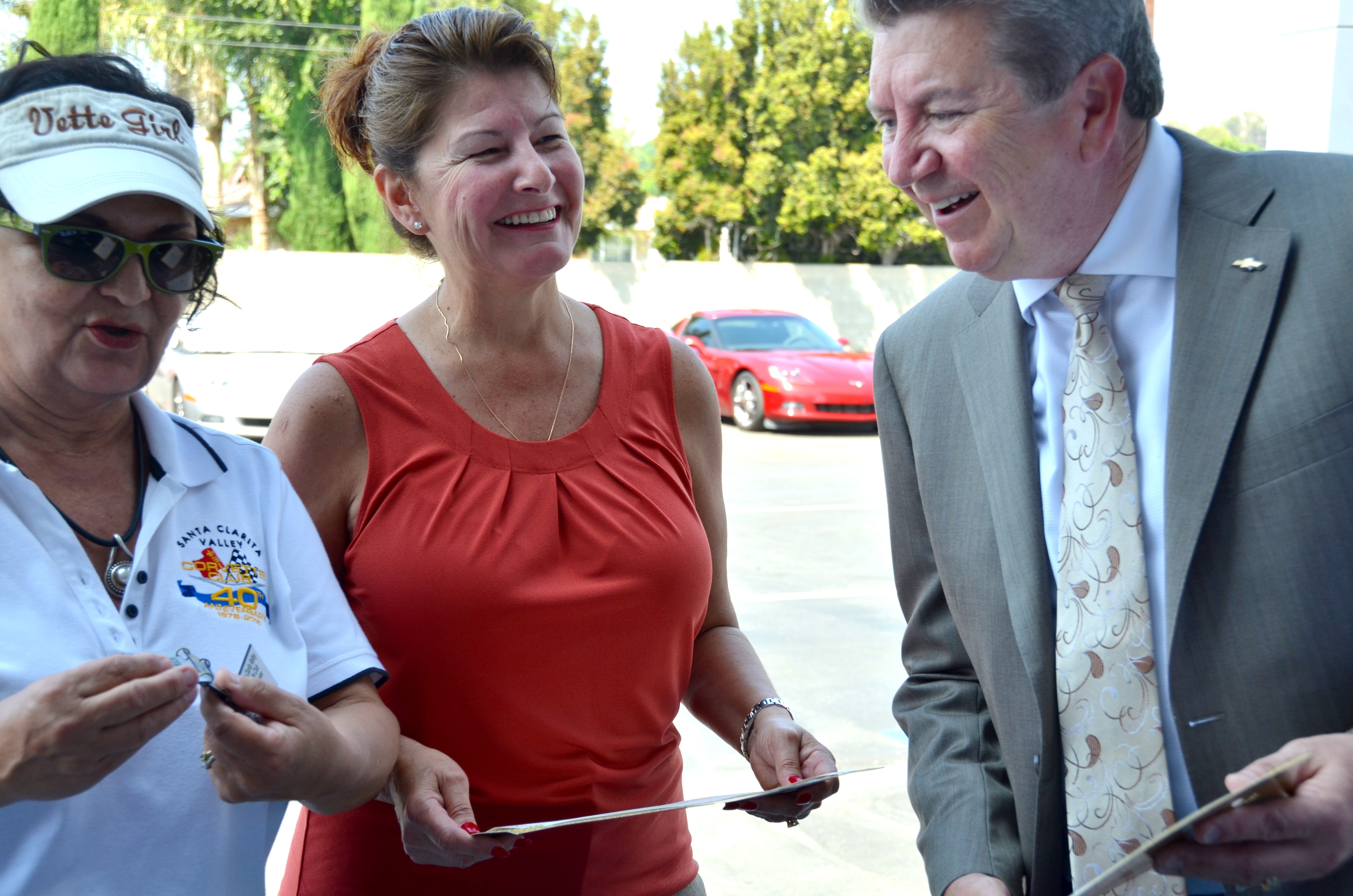 Our Membership Chair, Judy Woodings, presented John and Sandra with club name badges along with special membership certificates as they were welcomed into our club. John and Sandra proudly wore their new badges throughout the day and a “spy-shot” into John’s office even spotted his SCVCC certificate displayed in his bookcase!

The BBQ meal was delicious as always…The Corvettes were beautiful as always…
Time with friends was great as always…What could be better? Next time, I will drive the air-conditioned, modern Vette for the 97˚ return home! 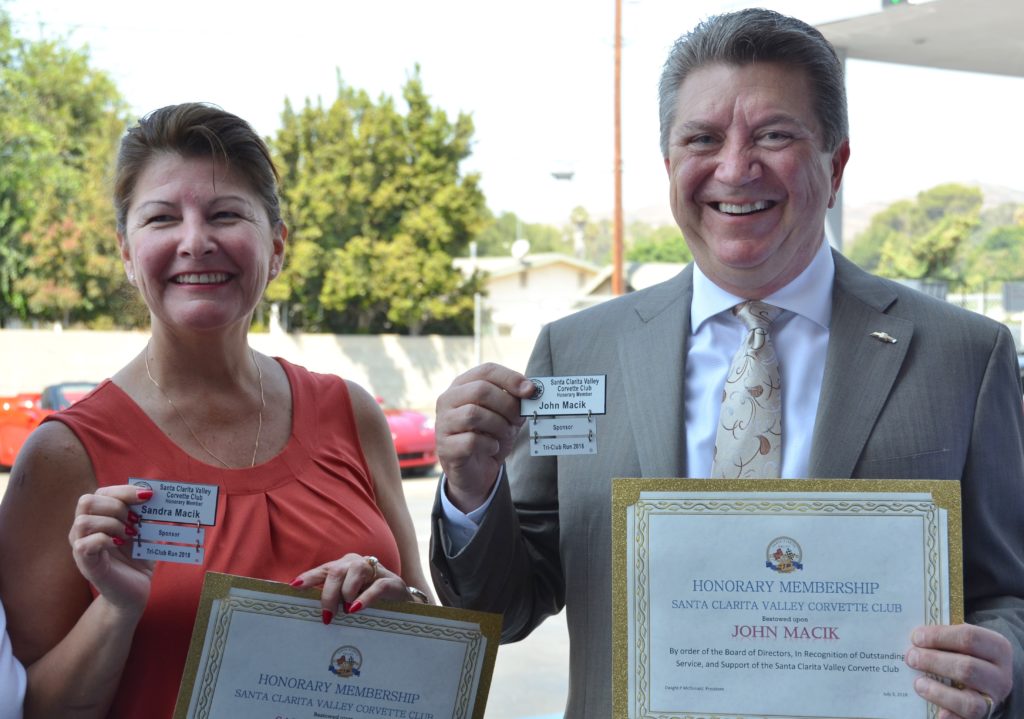 Many thanks to Santa Paula Chevrolet for another great BBQ, and welcome to the club John and Sandra!

In Awe of Moment

I took my Vette to Santa Paula Chevrolet to have its annual service performed, knowing it needed it prior to the MPCC run. When I left to go home I had an ‘In Awe of Moment’ which I’ll get to later.

As always, we (SCVCC club members) are treated fantastic. I checked in and had a brief conversation with Monty, my service writer, to go over my areas of concern. He assured me it would all be handled along with the bow to stern inspection and a wash. On my way into the show room, I stopped in to John Macik’s office to say hello and thank him for all he does for the Corvette community. Well, that ‘hello’ lasted about 30 minutes. He’s a very approachable man, which says a lot for his organization.

Following our conversation, I went across the street to grab a hoagie sandwich while I waited for my car to be completed. It just felt like the right thing to do. I’m not sure why, it just did, drive-n-eat. After eating, it was now shopping time! I love messing with the sales people. They just have this pre-conceived idea of what I can or can’t drive. It’s entertaining. Anyway, I found the car I want, a 2018 Chevrolet Corvette Z06 3LZ, Ceramic Matrix Gray Metallic with jet black interior, 650 HP.

I finalized my business for the day, got in my car, and headed east on Harvard Blvd. At the light at Palm, I was waiting for my light to turn green so I could turn right to go the freeway and home. It was then I saw a beautiful young woman. She was a 10 out of 10, waiting to walk across the intersection where I was going to turn. I waited patiently for her to cross and proceeded to make my turn. As I turned, I noticed a middle-aged man in a mid-sized tin can waiting to go straight as the woman crossed the street in front of him. I watched the man watching the woman, or so I thought. Upon completing my turn and driving past the tin can, I caught the ‘in awe of moment’. I realized he was not watching the pretty woman. No, he was watching my car and rubbernecking his head until it was virtually facing backwards. I could see he was in total awe of my car.

I must admit, his reaction was a bit of a surprise, extreme, and made me laugh. This type of reaction happens frequently. It made me think how special it is to have such a great car and to be able to enjoy it year-round. So for now, with a smile on my face and the roar of “The Mighty LS3” at my back, I bid you adieu.

The clouds parted just enough during the March rainstorms for the eagerly awaited BBQ at Santa Paula Chevrolet. As in days past, our participants assembled at our start point in the Walmart lot for headcount, waivers and a driver meeting.

We know the way, but it’s just what we do, besides, you could almost smell the tri-tip on the horizon. Nineteen was the count of the Corvettes as we once again headed west on the 126 and as always, we were a sight to behold!

Our friend and host, John Macik, from Santa Paula Chevrolet, again cleared his lot to for the onslaught of Corvettes that rolled in for another of his now-famous BBQ get-togethers.

We don’t all come just for the food though. Some shop and most of us dream as well.

There was quite a bit of attention paid to the current Torch Red Grand Sport Convertible on display and also to a certain ZO6 for sale on the lot. Come on people, Santa Paula would love to do business with us!

Laird’s Butcher Shop and BBQ keeps getting better and better with the spread they prepare for us at every gathering. The grub and Vettes keep us coming back time and time again. What a great combination. As always, for a Saturday run and a great BBQ, Santa Paula Chevrolet is THE place to go.

Thanks to John and his crew for another fine event!

Walmart was once again the starting location for the club’s latest run — destination Santa Paula Chevrolet. As the group gathered, waivers and signatures were collected and submitted to the Law Firm of Catch’em, Cheat’em, & How.
The caravan of Corvettes left shortly thereafter. The 126 highway is always a beautiful drive with the exception of suicide bugs that tend to add unwanted temporary blemishes. Because of unexpected traffic, the caravan was somewhat delayed.
The Ventura Corvette Club was the first to arrive. SCVCC showed up shortly thereafter. After everyone parked their ‘Vettes, members gathered in groups, mingled and socialized. Many also staked out prime shaded spots in preparation for lunch.
It must be pointed out that the Munshi’s are CLEARLY having SCVCC withdrawals. Driving from Prescott to Santa Paula definitely gets them “Most Loyal Members” award. Sadly, they didn’t drive their ‘Vette, choosing instead to remain incognito in their jeep.

The much-anticipated reason for the run finally appeared —– FREE FOOD! The tried and true BBQed trip tip, chicken, sausages and various condiments were placed buffet style. Some folks were still caught off guard by the spicy sausages.
After the meal was over, the crowd gradually dispersed to enjoy the remainder of the weekend, that is with the exception of your Editor and Membership chair. It appears Mike and Judy have helped our host John Macik “sponsor” BBQs for the near future with the upgrade in Grand Sports that came about. Santa Paula Chevrolet is always there for all of your Corvette needs and…desires!

So then, if you love Corvette runs and BBQ, Santa Paula Chevrolet is THE place to go. And now, we don’t have to wait until spring for another eating/shopping opportunity. We are all invited back again on December 9th for a Corvette/Toys for Tots event. Yes, the Marines will be present to receive our donations

Point to Ponder: Based on the numerous runs this writer has attended, I believe SCVCC’s board members should strongly consider changing our name to the Santa Clarita Valley Culinary Club.