We are all old enough to remember The Beach Boys and much of their music is imprinted in our minds, but one song written by Al Jardine might have slipped through the crack for most. The song is “California Saga” and starts out with big reference to Monterey. The first part of the lyrics goes: 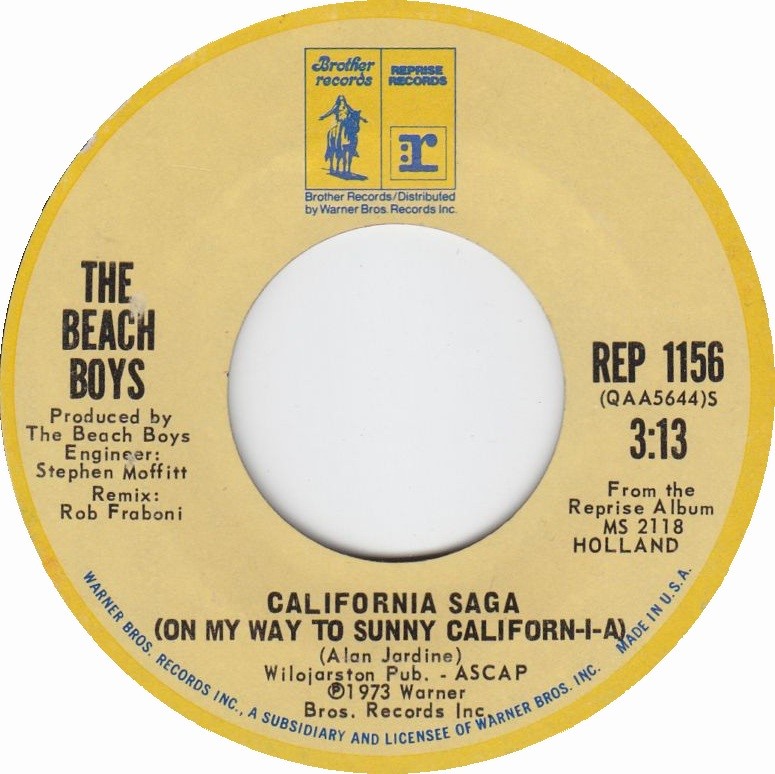 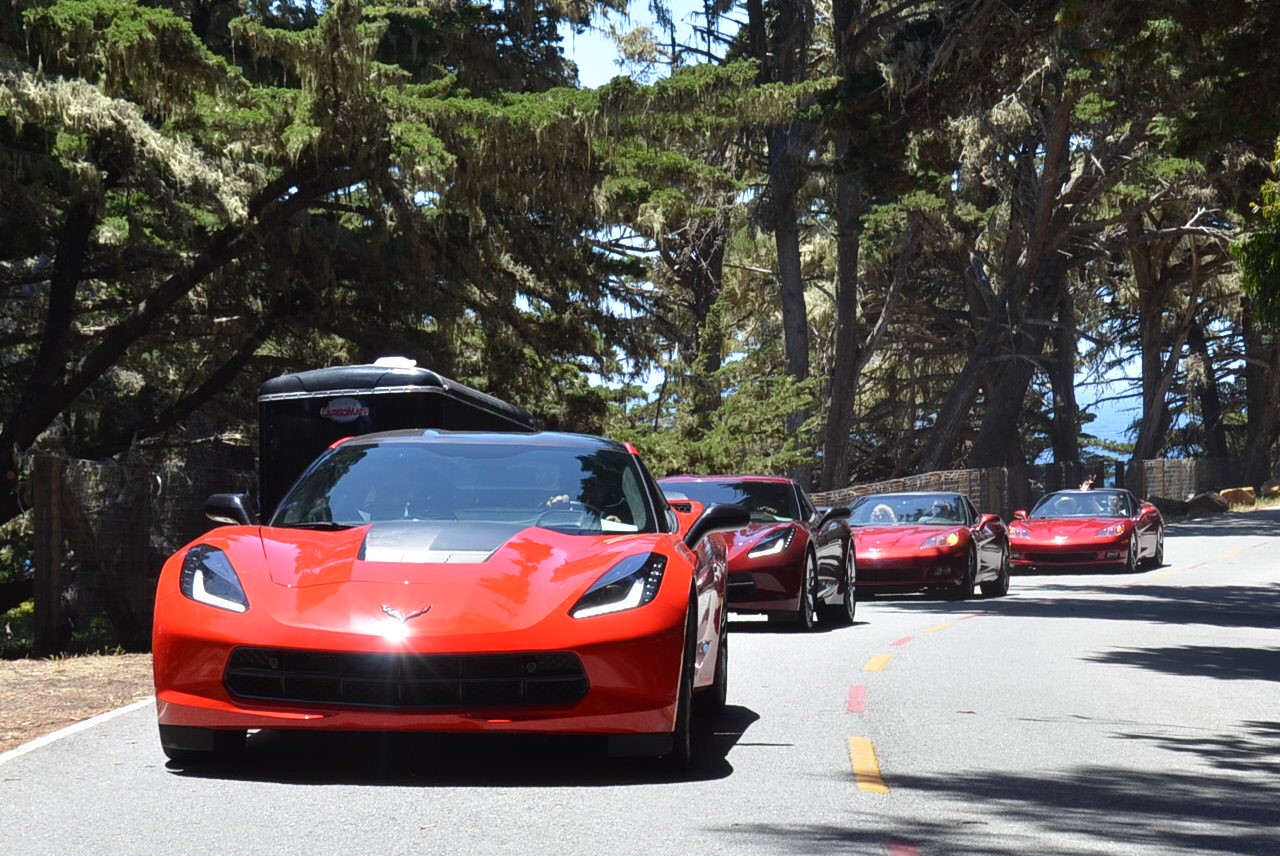 So, about now you are asking, what’s that got to do with the Monterey Run? Here goes then. A long, long time ago, when some of you were in diapers and others were looking for deferments from the draft, some had a short 8-week visit at Ft Ord for Basic Training. Uncle Sam sent me to the Monterey Peninsula in 1968 as a new 2nd Lieutenant on another mission of sorts. I was accepted into Language School at the Defense Language Institute on the Presidio of Monterey for a one-year Vietnamese language course. So, while you may have been listening to Joan Baez, I was appreciating Cannery Row, the Monterey Folk Festival, Big Sur, Laguna Seca and 17-Mile Drive, listening to California Saga and The First Time I Ever Saw Your Face from Play Misty for Me. I was hooked on Monterey never miss an opportunity to go back for visits as often as possible.

When our club began attending the Monterey Coast Corvette Caravan in the infancy of the event I always marked my calendar to make sure not to miss the run. As the years passes, the annual Monterey event became an every-two-year thing, alternating with the Lake Tahoe Corvette Club show each June.

This year, as in many past years, Monterey was on my calendar as it was with several other members of our club and apparently MANY members of numerous Corvette clubs throughout California and beyond with the event becoming extremely popular. Since the size of the function was limited to 200, due to venue constraints, the sign-ups filled much faster than in years past and our club only snatched up ten spots for five couples. The Woodings, Turkheimer, de Avila, Bachmura, and Meier/Granen couples attended.

Our run started early on Thursday, 5-31, with a meeting at Walmart and then north I-5 to CA-46 and into Paso Robles for lunch at Bubba’s Bad BBQ. 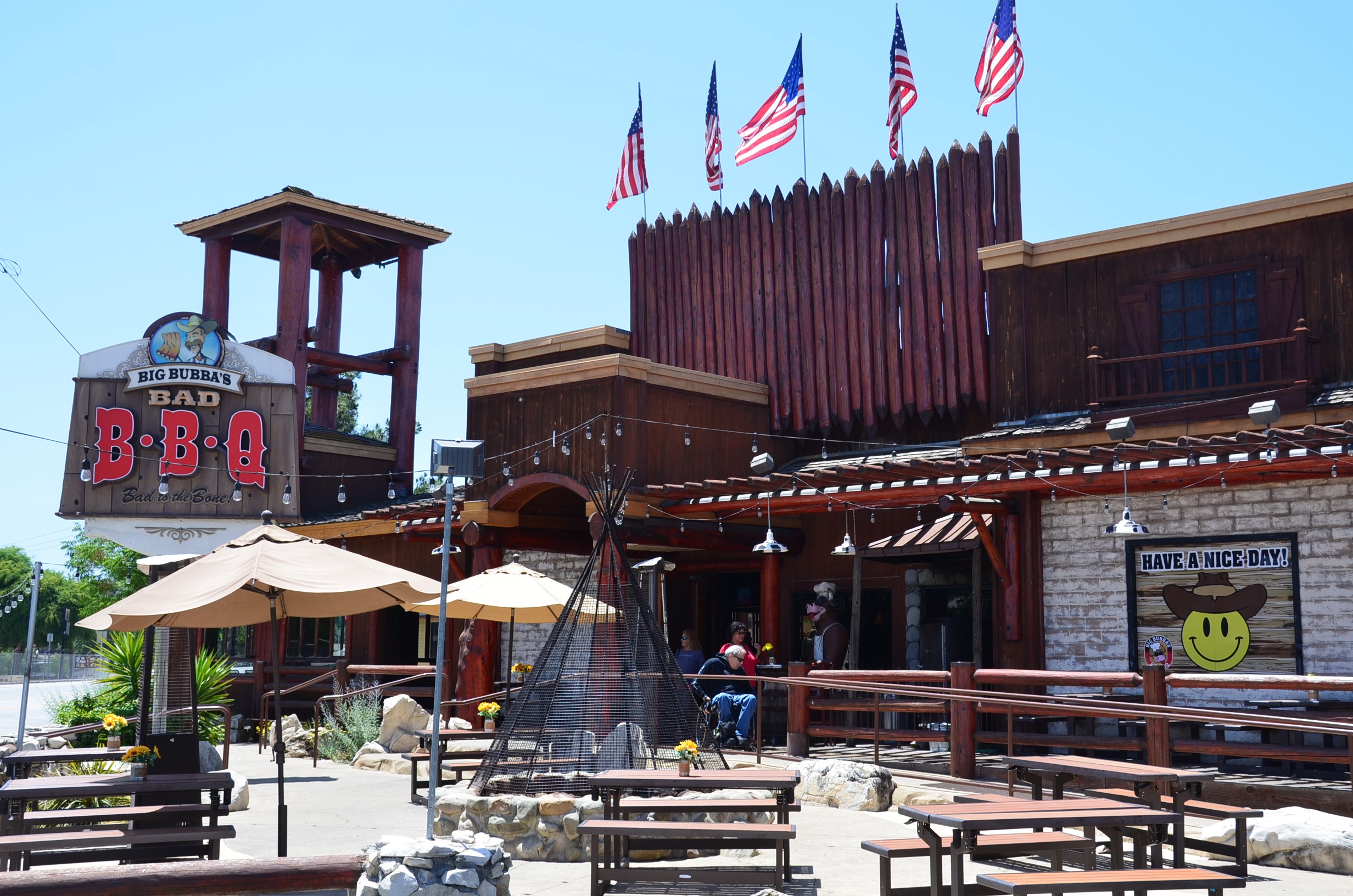 (If you haven’t traveled CA-46 recently, it is now a great route with most of the hour ride from Lost Hills to Paso Robles now a 4-lane highway.) Then it was off to our destination at the Embassy Suites in Monterey for the next three nights.

The Monterey club really knows how to put an event together and obviously worked their rear-ends off producing an action-packed event for us all. We began the fun right away with a well-attended Hawaiian Luau in Carmel Valley, complete with 3 hula dancers. Food, spirits and company were all terrific. 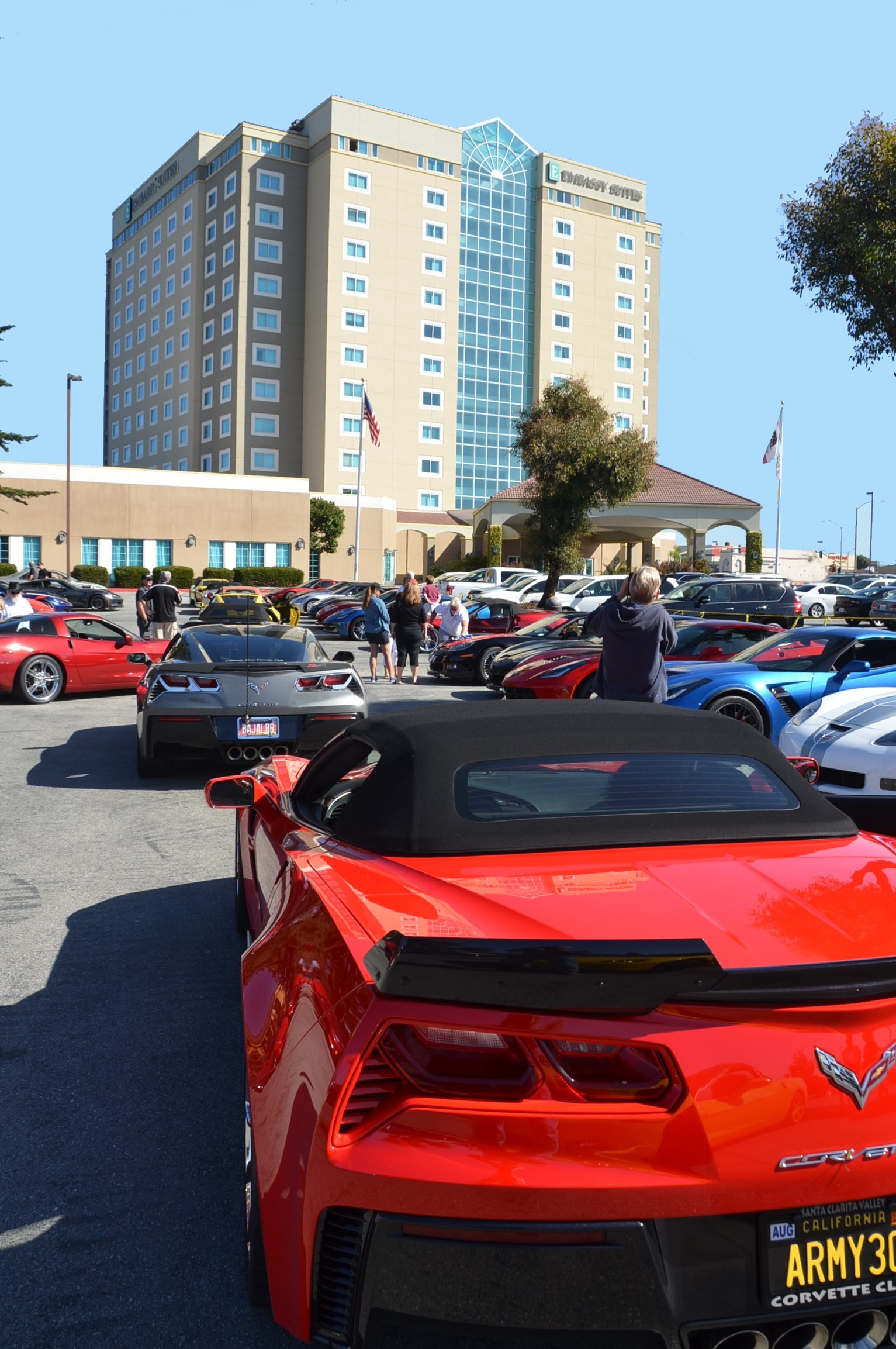 The Monterey club held a drawing from the names of early registrants and the Turkheimers were picked for an upgrade for their lodging with a spectacular bay-view room at the hotel. So, you know where we enjoyed hanging out during the free time we had! 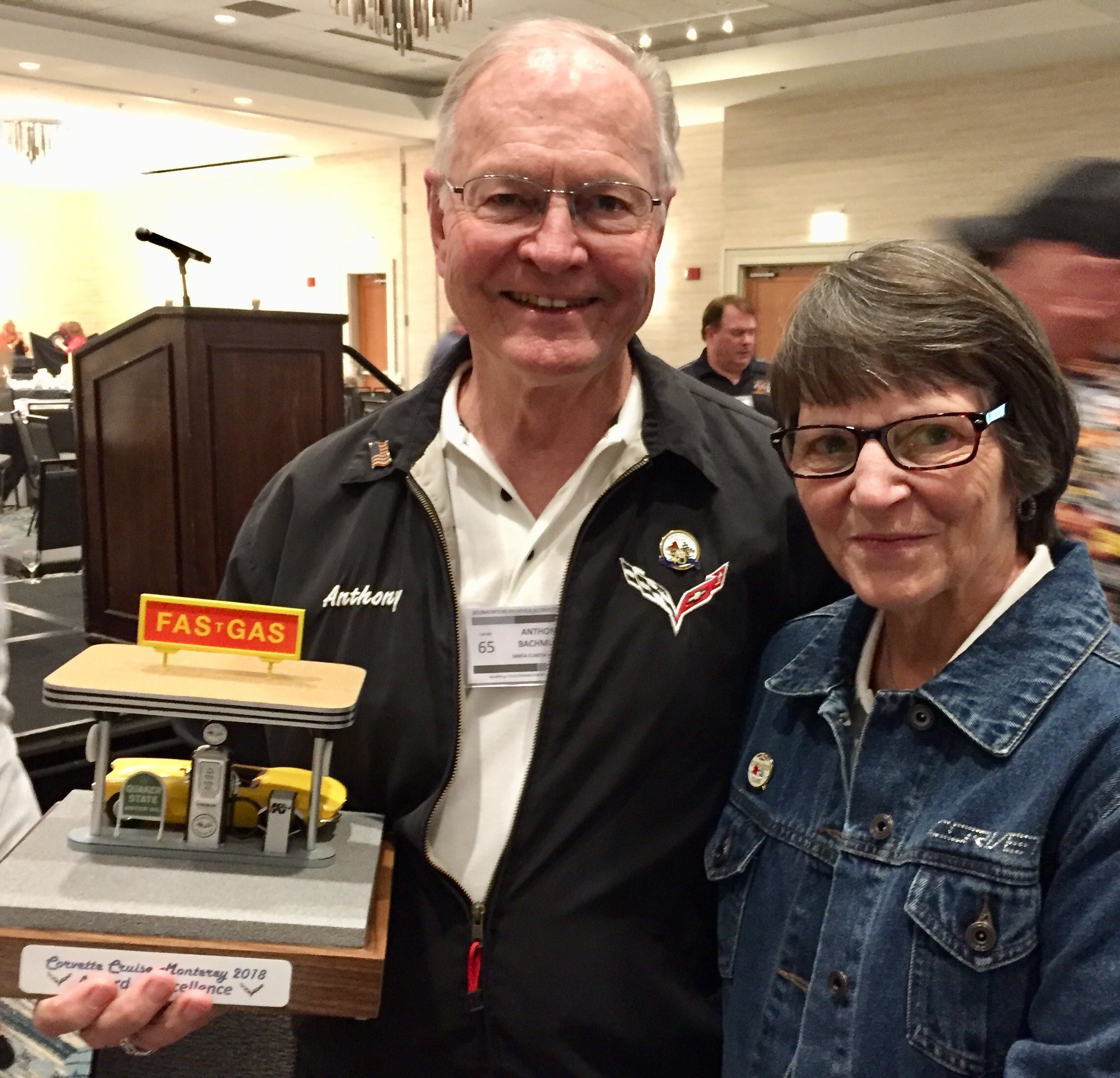 Now is the time for the synopsis of the weekend. The Bachmuras took home one of Chuck August’s great hand-built trophies for their well-shined Stingray, Brian de Avila left some cash at the “car race” table which greatly boosted the other players’ winnings, the Turkheimers were great hosts, and the Woodings were first to sign up for the event for the second consecutive time.

Now, to tie up the loose ends; you were about to ask, “Were the Attls there?” Why, yes, they were! They say “hi” to all and hope to see you at the 40th Anniversary picnic!

And, from the song above, who is still asking, “where is Penny’s Place”? Now, for the rest of the story, you will have to ask Al Jardine, but it’s named after Big Sur Sycamore Canyon resident Penny Vieregge, an EMT, now 89, who founded the local off-cliff rescue unit